I've shared before that I am a huge Robert Ryan fan.  Although he's typically a cynical, unlikeable, "bad boy" kind of character, I just really like him and think he was a tremendously underknown and underappreciated actor.  So, whenever I have the chance to catch one of his films, I do.  The Set-Up, from 1949, stars Ryan, along with Audrey Totter, under the direction of Robert Wise, in a gritty boxing drama.

Ryan plays Bill "Stoker" Thompson, an aging boxer who has been on a losing streak.  His wife, Julie (Audrey Totter), hates watching him get beat up and really wants him to quit the business.  However, Bill, sure he is just one punch away from the top spot, tells her that "when you're a fighter, you gotta fight."  So, certain he will be successful, he gets set for that night's fight, which will pit him---a 35 year-old---against an up-and-coming 23 year-old.

When Stoker hits the ring, he gives it everything he's got and puts up a fierce fight.  What he doesn't know, though, is that he is supposed to lose.  His manager already guaranteed Stoker's loss...only thing is, he failed to tell Stoker.  And when the powers-that-be are double-crossed, there's a price to pay.

According to Robert Osborne's introductory information, Robert Ryan considered Stoker Thompson to be his favorite role. I think he does a great job here, and it's easily one of my favorite Ryan roles as well. This film is out on DVD and should be quite easy to track down.
Happy viewing!!
Reviewed by Patti at 1:00 PM

Ever get teary-eyed in a James Cagney film?   If not, watch City for Conquest, a mildly sentimental drama from 1940, and you just might.  This touching film also stars Ann Sheridan, with Donald Crisp, Arthur Kennedy, Anthony Quinn, and future director Elia Kazan, in supporting roles.  No, the film doesn't bring huge sobs, but it definitely always makes me gently weep.

Cagney and Sheridan portray Danny Kenny and Peggy Nash, who have been sweethearts since childhood.  Danny, a manual laborer, does some boxing on the side, but he's not overly interested in making a career out of the ring.  However, wanting to make some quick money to help his aspiring-musician brother (Arthur Kennedy), he takes on the name Young Samson and agrees to a fight. Although Danny finds immediate success, he really doesn't want to keep fighting, so he backs away from the ring.

Dancing professionally is what Peggy is all about.  She's been dancing since she was a child, and having her name in lights is all she can think about, so when professional dancer, Murray Burns (Anthony Quinn), expresses interest in her, she's totally ecstatic.  Wanting more than just the average life she's known, Peggy partners with Murray, and the two begin touring together.

Danny wants to marry Peggy, but when she is offered a more lucrative gig, she chooses that over Danny.  Brokenhearted, Danny figures that the only way he can regain Peggy's love is to be on top himself, which causes him to push for a fight he just might not be ready for.

The Max Steiner score in this film is gorgeous...another thing you probably wouldn't expect in a James Cagney film and just one more reason I enjoy City for Conquest so much.  It's really a touching, heart-tugging film, which I hope y'all get a chance to watch.

Edie and Maggie, who are estranged and haven't seen one another for years, meet up at the funeral of Maggie's husband, Frank.  Edie and Frank had been in love many years earlier, but after being told by Maggie that she was expecting his child, Frank broke off with Edie and married Maggie, who then said that her child had died.  Edie learns from Maggie's long-time chauffeur, however, that there never was a DaLorca child.

After realizing that Maggie had concocted the pregnancy story in order to manipulate Frank into marrying her, Edie is beyond furious.  Not only did she lose Frank, her one great love, but instead of the life of wealth and luxury Maggie obtained, Edie went on to barely eke out an existence in a little bar.  Behind on her payments and in receipt of an eviction notice, Edie decides it is time to make Maggie pay for the years of heartbreak she has brought upon her.

Edie's plan is simple...she will kill Maggie, making it appear as her own suicide, and then take her place as Mrs. DaLorca.  Everyone will think that Edith Phillips is dead, having taken her own life while in a despondent state.  No one would ever consider that it isn't Maggie who lives...but Edie.

However, things don't go as smoothly as Edie had expected, for now, as Margaret, she must live a life she has never known.  There are unfamiliar rooms in a large mansion,  locked jewelry boxes, documents that need signed, friends she doesn't recognize, a vicious dog that suddenly becomes friendly, and an illicit lover who is not easily deceived.  How long can Edie keep up the charade?  How long can she pass herself off as Margaret DaLorca?  Especially when Edith's police officer beau (Karl Malden) begins investigating the case?

Dead Ringer is a very solid, highly entertaining 3-star film, which features a shocking twist and the usual top-notch performance of Bette Davis. Truly, that woman was at her best when she was being bad. I totally love her.

Anyhow, Dead Ringer is out on DVD and should be quite easy to track down. Also, TCM has it on their schedule fairly often. Do try to see it. Happy viewing!!
Reviewed by Patti at 11:22 AM 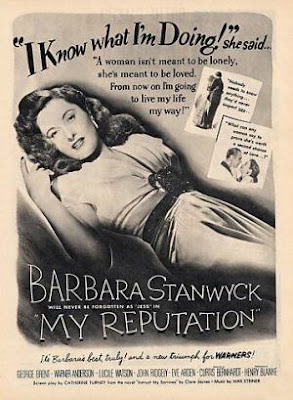 My Reputation, starring Barbara Stanwyck and George Brent, is a 1946 romantic drama which explores the theme of finding new love after the death of a spouse.  Jessica (Jessie) Drummond  (Barbara Stanwyck) has just buried her husband, Paul, a man who had been her whole world for fifteen years.  Although Jessie has two sons, they are unable to fill the void left by Paul's death; besides the fact that they want to spend time with their friends, they are about to depart for a boarding school their dad had attended. 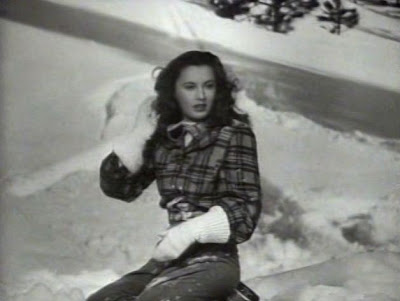 Distraught and lonely after the boys leave for school, Jessie agrees to accompany a friend and her husband to Lake Tahoe.  While skiing, she meets Major Scott Landis (George Brent), and the two of them enjoy several wonderful days together; however, Jessica is not quite ready for romance again, and when Scott makes a move to kiss her, she backs away.   Shortly thereafter, they go their separate ways...Jessie back home to Lake Forest, Illinois, and Scott to his new post.

As it turns out, Scott has been stationed right there in Illinois, and he and Jessica soon meet up again.  This time, Jessica is interested, and she accepts his dinner invitation.  Unfortunately, disapproval and criticism are rampant...even her mother condemns the new romance. The tongues of Jessie's society friends begin to wag, and she finds that her reputation is being tarnished.  Ultimately, Jessie will need to determine if she is going to allow herself to love again or if she is going to live her life based on the opinions of others.


While there is no high drama in My Reputation, it is, nevertheless, a very solid 4-star film with likeable characters and an interesting storyline.  I am a huge fan of both Barbara Stanwyck and George Brent, and I think they were great together.  This movie is out on DVD and should be quite easy to track down.

Bigger Than Life, from 1956, is a hard-hitting drama which explores the very real problem of addiction to prescription drugs.  This film stars James Mason, who gives a totally amazing performance, and Barbara Rush, with a young Walter Matthau in a supporting role.

Kindhearted schoolteacher Ed Lavery (James Mason) is having some health issues which cause him extreme pain and even, sometimes, to black out.  A trip to the hospital reveals that Ed is suffering from a rare arterial disease, one which has an extremely poor prognosis.  In fact, the disease usually proves to be fatal; however, his doctor tells him about an experimental drug which might be effective.  Of course, Ed and his wife, Lou (Barbara Rush), are open to trying the drug, since it is really the only option they have.  So, with a warning from his doctor about following the very strict dosage instructions and being aware of any behavior changes in himself, Ed is released from the hospital.

Early on, Ed's behavior begins to change; however, instead of mentioning these concerns to his doctor, Ed takes more than the proper dosage of pills.  On two occasions, he even lies so as to get another prescription of the medication.  One time, when asking his doctor for a refill ahead of schedule, he tells the doctor he dropped several pills down the drain; another time, he impersonates a doctor and writes a prescription for himself.

As Ed continues taking more than the prescribed dosage of medication, his personality completely changes---he becomes paranoid, angry, arrogant, condescending.  His wife and son take the brunt of his behavior, and it all comes to a head one weekend when the doctor is away and unable to be reached.


I found this movie gripping.  From about minute one, I was hooked, and it didn't let me go until the very end.  James Mason, who I am only just now really getting to know, was spectacular here.  I've only seen about six of his films thus far, but, surely, Bigger Than Life has to be the performance of his career.  I read several reviews of this film on Net Flix, and many of the reviewers seem to think that this movie was a scathing indictment of  the 1950's moral and social climate.  I don't know, maybe it was, but if so, that message was lost on me.  I didn't see that at all.  To me, this was simply a powerful film which depicted the dangers of improperly taking prescription medication.

This film is out on DVD...it's part of the Criterion Collection.  It should be readily available and quite easy to track down.  Happy viewing!!
Reviewed by Patti at 9:49 AM