All That Heaven Allows (4 stars)

With tomorrow being Rock Hudson's birthday, I thought a re-watch of one of my favorites of his films (and a re-working of one of my earliest posts) was in order.  All That Heaven Allows---a 1955 Douglas Sirk romantic drama pairing Rock with Jane Wyman---is a tender, touching film which explores the theme of romance between an older woman and a younger man. I am totally not a Jane Wyman fan and would have preferred someone else to have been in this role. (Susan Hayward comes to mind as one who I would have loved here, and given that she was only three years younger than Jane Wyman, her age would have worked in this role.) On the other hand, I think Rock Hudson is fabulous. He is beyond gorgeous at this point in his career, and he and the sweet storyline are the reasons I like this movie so much. 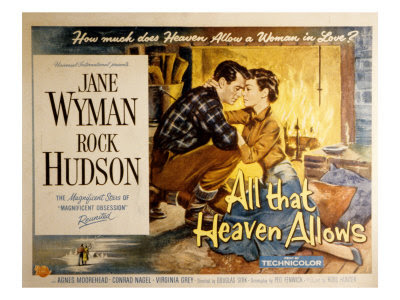 Jane Wyman plays Carrie Scott, a socially prominent, middle-aged widow, with college-age children. (You never really know how long she has been a widow, but you assume it's not been too long.) With her children off at college, Carrie is quite lonely, and even though her country club friends try to keep her active, there is still something missing in Carrie's life.

One day, while she is lunching alone on her terrace, Carrie makes the acquaintance of Ron Kirby, her new gardener, who tells her that his father has died and that he has taken over the business. Several years younger than Carrie, Ron is a simple, down-to-earth man totally at ease with himself and his position in society. He doesn't aspire to be socially prominent or to live the country club life; rather, he is content to live in the country and to try his hand at tree farming.

Carrie and Ron are drawn to each other and begin spending time together, despite the fact that the tongues of the snobby country club crowd are beginning to wag. When Ron takes her out to his tree farm, Carrie is fascinated by the old mill located on the property and tells him it would make a wonderful home for him and the wife he will one day have.

Several weeks later, Carrie is stunned to visit the mill and discover that Ron has begun renovating it and it is shaping up to be a beautiful home. He tells her he is doing it for her, for them...and he tells her he loves her and asks her to marry him. At first, Carrie turns him down, convinced that their different lifestyles and the age difference between them will prevent them from finding happiness. However, after Ron encourages her not to worry about what other people think and to take a chance on happiness, Carrie accepts his proposal and is blissfully happy. 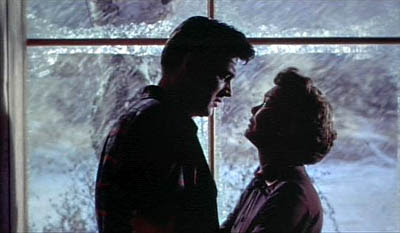 When Carrie calls her college-age children home to share the news with them, she is unprepared for how violently they oppose such a union. Besides the fact that Ron is much younger than their mother, is the fact that socially he is not what she deserves. They are certain he could never fit in with the elite country club crowd Carrie has run in for years, and a cocktail party with said people proves they are right. The gossip mill is in full force when Carrie and Ron show up for a party, and ugly words about Carrie's fidelity to her deceased husband make their way to Carrie's daughter's ears. Both of Carrie's children tell her that such a marriage will shame them and totally ruin their lives.

Will Carrie reconsider?  Will she put aside other people's opinions and do what makes her happy?  These are the questions which play out in the balance of this sweet, tender film.

As noted, I don't care for Jane Wyman, but Rock more than makes up for that. I quite adore him---his gorgeous presence makes any movie enjoyable for me.  And this film is definitely sweet and lovely and even gets me mildly misty-eyed.  Out on DVD, it ought to be fairly easy to track down.  And, just FYI, Jane and Rock were paired together in another romantic tearjerker, Magnificent Obsession.  I highly recommend both that film and this one. 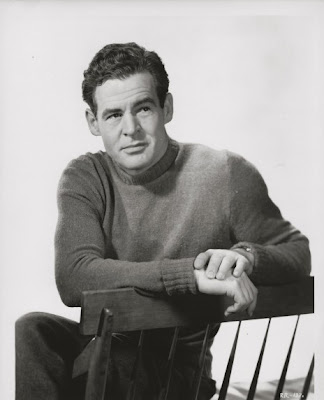 A tremendously under-rated Hollywood talent, Robert Ryan originally set out to be a journalist; however, with the Depression in full swing at the time of his graduation from Dartmouth College, there were no newspaper jobs available to him, so he took on a number of other jobs for several years.  Eventually, he got involved in the theatre and made his way to Hollywood, where he gave incredible performances in such films as Crossfire, Inferno, Odds Against Tomorrow, and Bad Day at Black Rock.

Although he never retired from films and was making his final movie, The Iceman Cometh (which incidentally was also Fredric March's final film), the year of his death, the stage often drew Ryan back.  Though he did other stage roles, having been a Shakespeare appreciator, he enjoyed taking part in Shakespearean plays; one of his roles was Marc Antony (opposite Katharine Hepburn's Cleopatra).  Helen Hayes said about that portrayal, "What a joy it is to see a real man playing Antony." 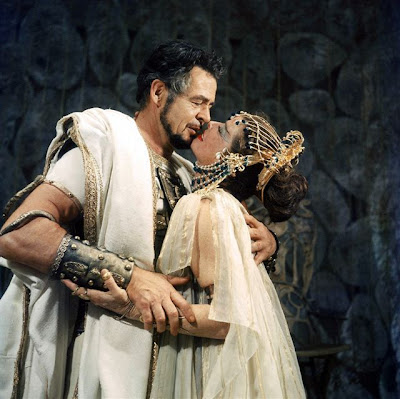 Besides entertaining audiences with his brilliant portrayal of cruel, angry, sadistic men, Mr. Ryan also served his country by way of the Marine Corp.  Based at Camp Pendleton, California, he spent two years as a drill sergeant.  Kind of fitting that his birthday is on Veteran's Day. 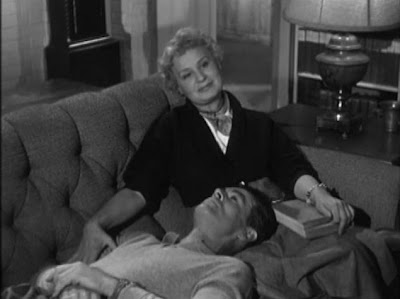 My absolute favorite of Mr. Ryan's films is About Mrs. Leslie (reviewed HERE).  This touching romantic drama, also starring Shirley Booth, is one of the few Ryan films which brings me to tears.  Though he excelled at playing the heavy, About Mrs. Leslie definitely shows the broad range of his talents.

Rounding out my list of 5 favorite Ryan films are: 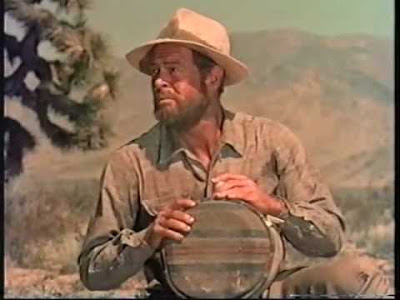 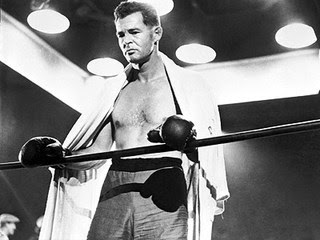 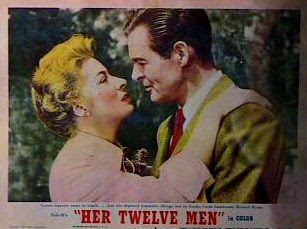 Interestingly, though it was Ryan's Oscar-nominated (supporting actor) performance as a cruel anti-Semitic soldier in Crossfire which first brought the brilliance of this man's acting to my attention, and though I love him in those "bad boy" roles, my five favorite films all show a bit of a softer and/or more likable side.

So, here's to you, Mr. Robert Ryan, on your 103rd birthday.  You were a completely sensational actor who always gave a terrific performance.  I completely adore you and will always consider you one of my #1 guys.  Thanks for bringing so much viewing pleasure to my life with all your wonderful films.