This article is part of the James Stewart Blogathon hosted by the Classic Film & TV Cafe. You can view the complete blogathon schedule here.


The Jackpot, from 1950, is a little-known Jimmy Stewart comedy which I discovered on Fox Movie Channel a couple years ago.  It's a film I had never even heard of, let alone seen, but since my family adores Jimmy Stewart, when I saw this on the FMC schedule, I just had to set the DVR.  It's really a charming movie, and even I---drama-lover that I am---enjoyed every minute of it.  The film also stars Barbara Hale, while James Gleason and a young Natalie Wood have minor roles. 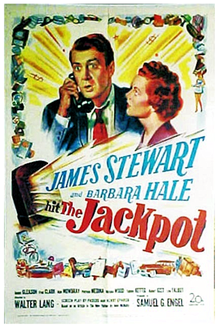 Bill and Amy Lawrence (Stewart and Hale) are just an average, everyday family---that is, until bandleader Harry James changes their life for the worse.  Of course, it wasn't Harry James's fault--- his name just happened to be the answer to a radio show's "Mystery Husband" contest.  Though Bill at first thinks his phone number being chosen to play the game is nothing more than a gag, he soon discovers it is all very real, and he more than gets into playing along.  When, by the flip of a coin, Bill decides that Betty Grable's husband is the mystery husband and that by knowing that, he has won $24,000 worth of prizes, total mayhem descends upon his formerly mundane life. 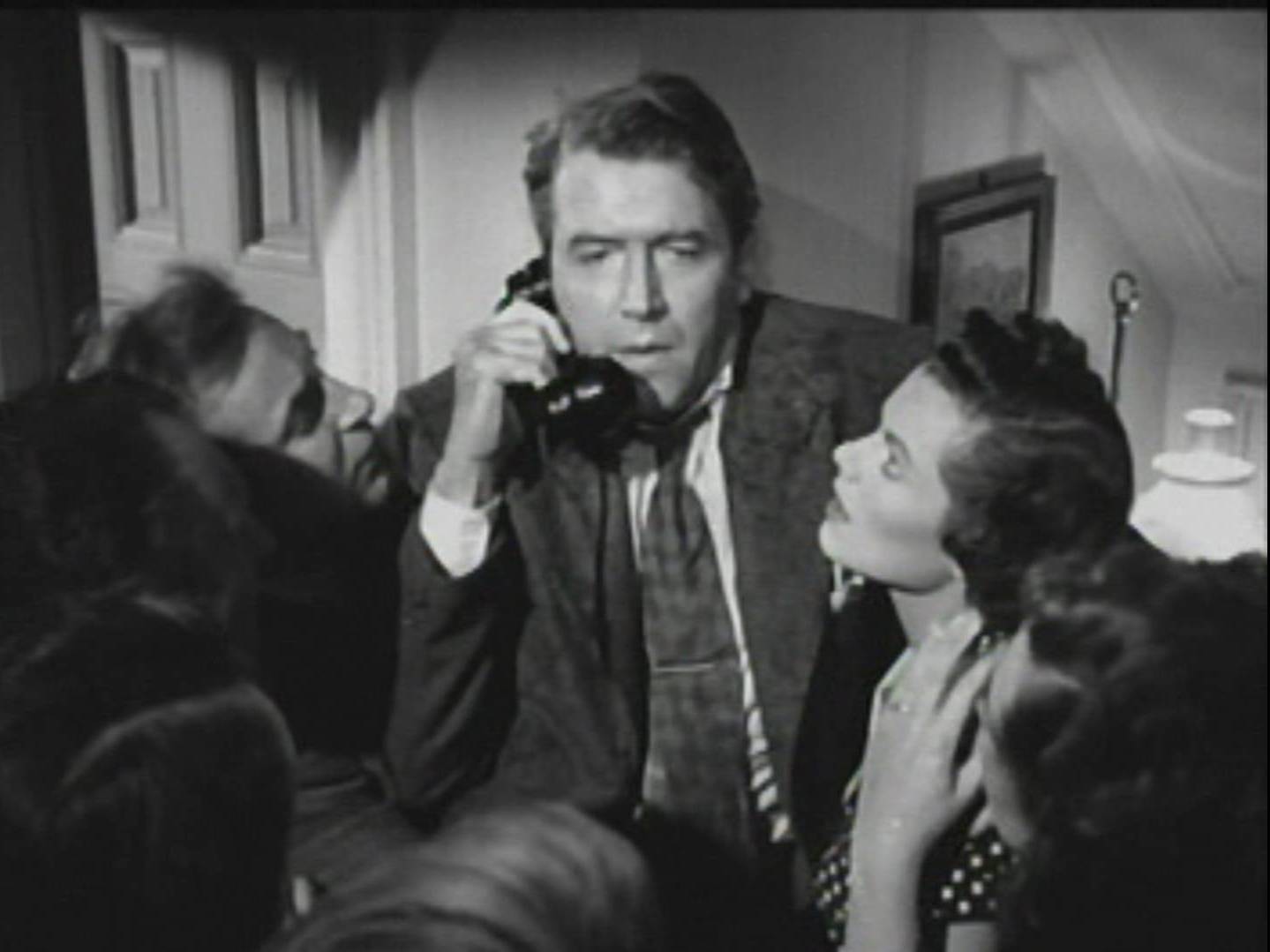 Bill and Amy's prize package includes an assortment of goodies, some practical, some hilarious---a diamond ring, a palomino pony, a complete home makeover, a grand piano, several thousand cans of soup, a trip for two, a portrait appointment with an artist, and on and on.  The chaos begins when the Lawrences are informed that they are responsible for the income tax on everything.


When all is said and done, they owe $7,000 in taxes for all their loot, and that's where the fun of this film comes in.  Adding to their dilemma of trying to sell their winnings in order to raise the money for the tax, Amy begins to suspect that Bill is having an affair with the French artist painting the portrait.  How it all plays out is the balance of the film.

The Jackpot is just a sweet, loads-of-fun movie.  It's certainly no Academy Award winner, but it's a delightful film the whole family can enjoy . . . yes, even the little ones ought to get a huge kick out of this.  Jimmy Stewart is his usual, totally wonderful self; I feel quite sure that all Stewart fans will want to see this 4-star, little-known gem.

While this film is not out on DVD, it is on VHS.  Additionally, it is available on YouTube, in its entirety (HERE).  Definitely try to see this if you can...I'm sure you will enjoy every minute of it.

Right of Way (1983)---Better Late Than Never, The One and Only, Late-Career Pairing of Bette Davis and James Stewart

Impossible as it may be to believe, it wasn't until they were both 75-years old, that screen legends Bette Davis and James Stewart ever made a film together (both were born in 1908). While both are extremely beloved, iconic stars of the golden age, it took until 1983 for their film paths to cross for the first (and only) time.  That film, an emotional, heart-tugging, made-for-Cable-TV drama called Right of Way, also stars Melinda Dillon.  Based on Richard Lee's play of the same name, Right of Way is my addition to the "Diamonds and Gold Blogathon" hosted by Wide Screen World and Caftan Woman.  This event---dedicated to celebrating stars who were working well into their senior years---is sure to have a multitude of terrific entries.  You can access all the other articles HERE. 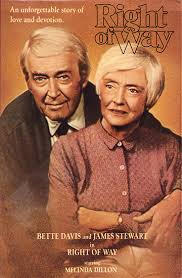 Elderly and long-married Teddy and Minnie Dwyer (Stewart and Davis) have recently learned that Minnie is afflicted with a terminal blood disorder.  Although there are complex treatments which could possibly buy her a bit more time, Minnie's prognosis is bleak, and the couple, who have lived together as one for years, have determined that they will die together as one.  Wanting to inform their daughter, Ruda (Melinda Dillon), of their plans, Teddy phones her and requests that she come for a visit.

Shocked by her parents' suicide plan---yet unable to talk them out of it---Ruda contacts Human Services, and after a social worker visits the Dwyer's unkempt home, Teddy and Minnie are rendered unable to care for themselves.  Knowing it is only a matter of time until they are under the state's care and no longer free to do as they please, the couple realize they will have to act quickly if they hope to be in control of when and how they die.  How it all plays out is the balance of the film.


It seems amazing to me that the only pairing of these two screen legends did not take place until the tail-end of both their careers.  While I don't know how they got along on set (Bette Davis, Larger Than Life doesn't say), they gave every appearance of being a loving, devoted, decades-married couple. The tender scenes between them easily reminded me of my own parents, grandparents, and in-laws.  I found Jimmy and Bette both to be wonderful and very believable in their roles.  Bette was typical Bette---sharp-tongued and not inclined to tolerate any foolishness.  Jimmy, too, was his usual self---lovable, slightly confused, somewhat-stammering. If I closed my eyes and just let my mind go, I would have thought Margo Channing and Elwood P. Dowd had come together.  What a testament to both of them that their iconic All About Eve and Harvey characters could still be envisioned at the end of their careers.

While patient suicide and euthanasia generate much controversy here in the 21st century, back in the early 1980's, they did even more so, making Right of Way quite bold for its time. I want to make clear that while I enjoyed this film and give it 4 stars, because of my faith, I absolutely cannot condone euthanasia or patient suicide.  However, the subject is handled with dignity and sensitivity and makes for a powerful discussion-piece kind of film.  Also, with many of us Baby Boomer/Generation X'ers currently watching our own parents age, Right of Way will probably hit close to home for the bulk of us.

Unfortunately, it doesn't appear that Right of Way is out on DVD; it is, however, available on VHS, as well as on YouTube (HERE).  I do hope you get a chance to see it, especially if you are a Bette Davis or Jimmy Stewart fan.