While first V-E Day, then V-J Day, meant that the Second World War had come to an end, sadly, for Audie Murphy the war would never end.  Though his bravery on the battlefield had earned him numerous medals (and ultimately a place in Arlington National Cemetery) and brought him home as a hero and the most highly-decorated soldier of the war, the horrors he had witnessed in battle had scarred him for life. "Shortly after the end of the war, when Audie was asked if he had gotten over the war, he responded, "I don't think you ever do." In short, though peace had come, Mr. Murphy would not know peace for the remainder of his too-short life; to not acknowledge this---and to talk only of his heroics---minimizes the enormous price he paid for his commitment to the cause of freedom.

Images of the war continually filled Audie's mind, making him edgy, tense, irritable, and paranoid.  He developed painful ulcers and depression, suffered from occasional blackouts, and his sleep patterns fluctuated between being disrupted by traumatic nightmares and an inability to sleep at all.  In an effort to get a few hours of rest a night, he began taking a prescription drug, to which he ultimately became addicted. After realizing  that his addiction had caused him to "live in a daze for three years, he locked himself in a Florida hotel room for several days" and, in true warrior fashion, endured the agonizing process of withdrawal. 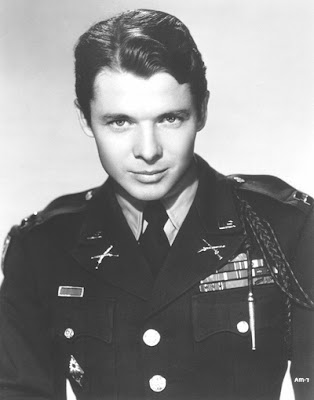 Audie's struggle with what we now know to be the very real disorder, Post Traumatic Stress Disorder (PTSD), contributed to the break-up of his first marriage.  Wife Wanda Hendrix claimed that he "constantly re-fought the war in his sleep and that his painful ulcers made him irritable and critical."  Hardly more than a year after getting married, the couple divorced.  While Audie would remain married to his second wife, Pam, for the remainder of his life, that marriage, too, suffered the stresses of the most-decorated soldier's battle with PTSD.

Although he would never find relief from the effects of the war, Mr. Murphy would fight for relief on behalf of future veterans. Despite the fact that discussing war-related mental problems was taboo, "in an effort to draw attention to the problems of returning Korean and Vietnam War veterans, he spoke-out candidly about his problems with PTSD.  He publicly called for the government to give more consideration and study to the emotional impact war has on veterans and to extend health care benefits to address PTSD and other mental health problems of returning war vets."  Also, his widow, Pam, would spend most of the remainder of her life---until she was 87 years old---working on behalf of veterans in a V. A. hospital.

Thankfully, more is known today than it was back then about the emotional effects of war on the men and women who fight them, and, thus, those afflicted are now able to receive better treatment.  We now know that what was once referred to as "battle fatigue" or "combat nerves" is not anything to be taken lightly.  It is a very real, very serious, disorder, and those suffering from it deserve our respect, support, and understanding...and, of course, our deepest thanks. Audie Murphy and his family---and countless other men and women and their families---have paid (and continue to pay!) much for the cause of freedom!

Having Audie as star of the month is totally appropriate for June, as June is PTSD Awareness Month.  The National Center for PTSD, through the United States Department of Veterans' Affairs, has a webite (HERE), which provides a wealth of information about a disorder many of our friends and loved ones are experiencing.

NOTE:  All information and direct quotes are derived from American Hero, The Audie Murphy Story, by Peggy Caravantes, Avisson Press, Inc., 2004, and from The Audie L. Murphy Memorial Website (HERE)

All photos used in this post were taken from The Audie L. Murphy Memorial Website.
Reviewed by Patti at 12:00 AM