New for 2014---the "Best Film Discovery of the Month" series, in which I will highlight the best "new to me" film I watch each month.  For January, that film is 1932's I Am a Fugitive from a Chain Gang, starring Paul Muni and featuring Glenda Farrell and Helen Vinson in supporting roles. Not only is this pre-code drama the best "new to me" film I saw in January, it is also my first 5-star film "discovery" of the year.  Based on Robert Elliott Burns's autobiography, I Am a Fugitive from a Georgia Chain Gang, this Mervyn LeRoy film received three Academy Award nominations, including Best Picture and Best Actor for Mr. Muni. 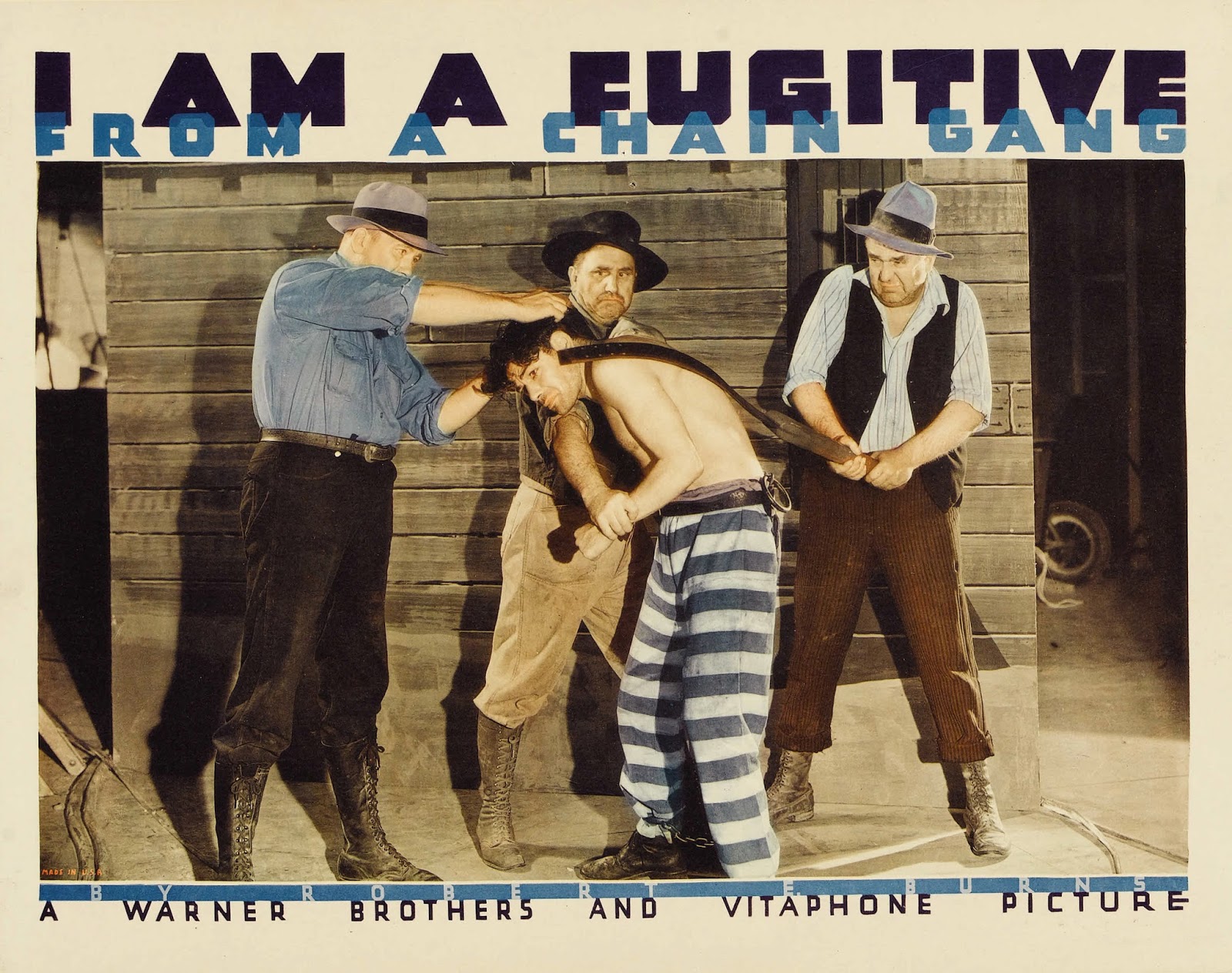 After being convicted of a crime he did not commit, WWI veteran James Allen is sentenced to 10 years of hard labor on a Southern chain gang.  When he is unable to cope another minute with the horrid conditions and the brutality of the guards, James convinces another inmate to break his chains, then he sets out on the run.

Escaping to Chicago, James changes his name to Allen James and eventually becomes a successful, respected businessman.  When his landlady (Glenda Farrell) discovers his past, she blackmails him into marrying her; it's a union void of love, however, and a few years later, in a fit of jealousy because Allen/James has fallen in love with another woman (Helen Vinson), the wicked woman turns him in to the authorities.


Although Allen/James had not committed any crime and has been a model citizen for years, he is returned to the chain gang, with the promise that his sentence will be for a period of only 90 days. Because he had spoken out about the inhumanity of the chain gangs, however, the "establishment" has no intention of honoring that promise, and once again, the man is forced to break his chains and live a life on the run.  How everything plays out is the balance of the film.

I Am a Fugitive from a Chain Gang is a masterpiece of a film.  It's gritty, meaty, powerful, deeply troubling and features an absolutely brilliant performance by Paul Muni...and the final line of the film is about as haunting an ending line as there ever was.

This film is out on DVD; however, I believe it is only available as part of the Controversial Classics Collection, which is a spendy $79.98.  Adding to the nearly cost-prohibitive price, TCM doesn't seem to air Chain Gang very often, so it might not be an easy film to catch.  Keep your eye out for it, though, as it is a spectacular must-see.

First up in my focus on the films highlighted in Majestic Hollywood, the Greatest Films of 1939, is Bachelor Mother, a sweet romantic comedy starring Ginger Rogers and David Niven. Co-starring Charles Coburn and Frank Albertson, this delightful movie, which received a Best Writing Academy Award nomination, garners 4-stars from me.  The film was remade in 1956, as the musical Bundle of Joy, with Debbie Reynolds and Eddie Fisher in the starring roles. 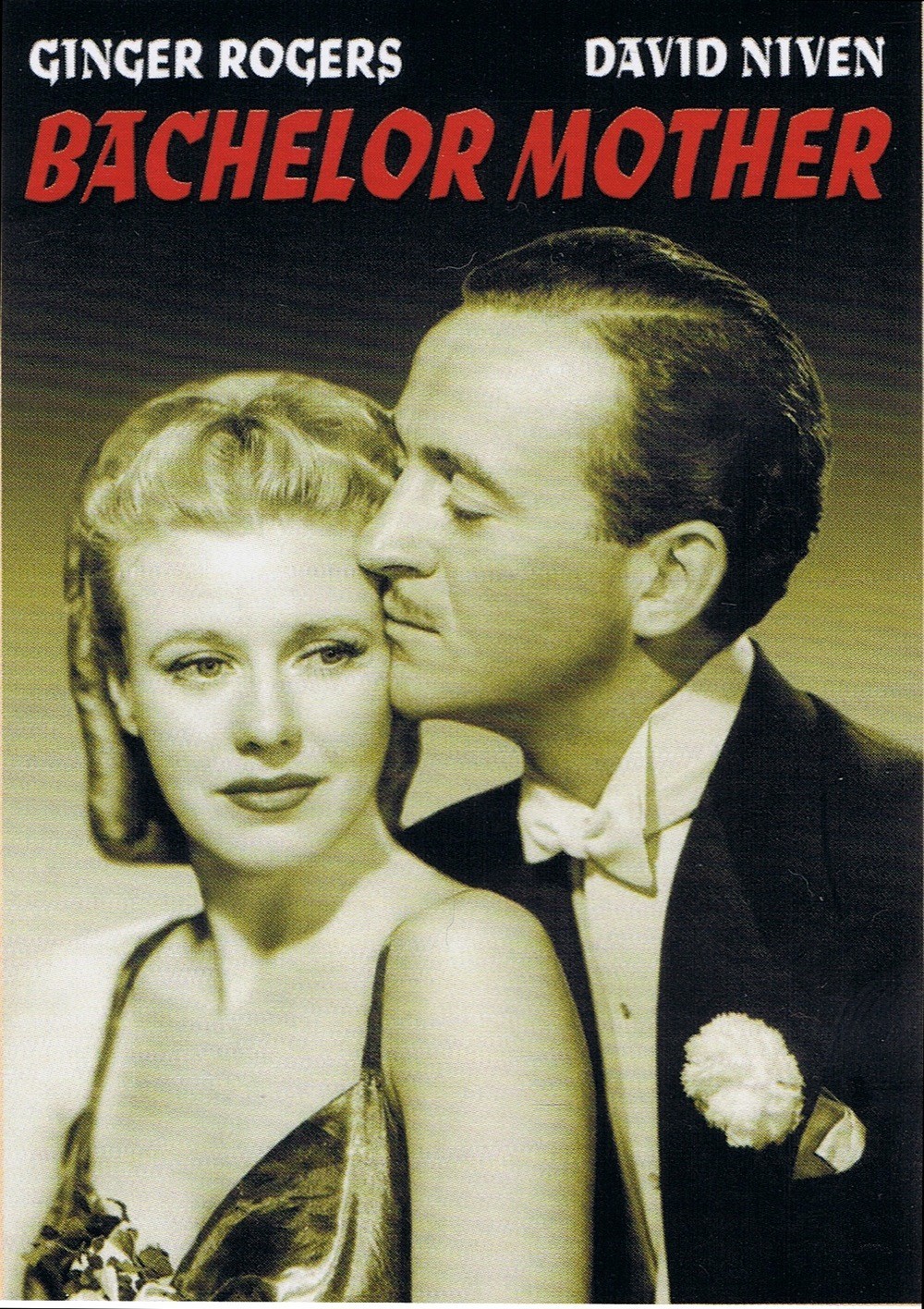 The movie begins with Polly Parrish (Ginger), being let go from her job as a seasonal salesclerk for the John D. Merlin & Sons Department Store. While walking home after her final day at work, Polly passes by the local foundling home, where she sees a woman leaving a baby on the doorstep. After ringing the bell of the home, the woman turns to leave, but Polly scolds her for abandoning her baby. Denying that the child is hers, the woman rushes away, leaving Polly with the baby in her arms as the foundling home door is opened. Of course, the directors of the home assume that the baby belongs to Polly, and though she tries to convince them otherwise, they don't believe her and keep insisting that she not abandon her baby. 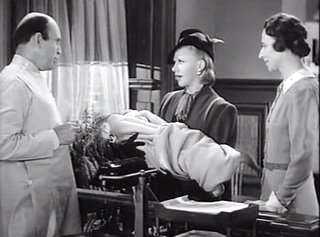 When the directors of the foundling home learn that Polly was recently let go from Merlin's Department Store, they assume her lack of employment is why she wants to give up her child, so they approach the store owner David Merlin (David Niven) about giving Polly her job back. Of course, David is happy to enable Polly to keep her baby and offers her full-time employment.

Satisfied that Polly will now be able to keep "her baby," the foundling home directors deliver said child to Polly's apartment, letting her know that because Mr. Merlin gave her her job back, she can keep "her baby." However, knowing it's not her baby, plus having plans that evening, Polly delivers the child to Mr. Merlin's home, telling his butler that "Mr. Merlin got her into this mess and that the child is his responsibility." The young man Polly is with overhears her words to the butler and assumes that David Merlin is the father of Polly's baby, and in a moment of jealousy, lets the senior Mr. Merlin (Charles Coburn) know that he has a grandchild. 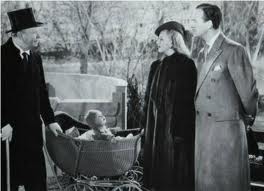 Bachelor Mother is not a profound film---and it's totally predictable---but it really is very sweet and lots of fun, plus it gives Ginger Rogers an opportunity to show that she was much more than just a dancer. She's lovely here, and delightfully funny, clearly establishing herself in "a new career as a comedienne." [1]  My husband quite adores Ginger---she's his #1 gal---and this is the film which began the love affair.

According to Majestic Hollywood, the Greatest Films of 1939, just days before production of Bachelor Mother was to begin, Ginger Rogers complained about the script.  Producer Pandro S. Berman attempted to assure her that the script "was better than 90 percent of Hollywood scripts going into production;" Ginger disagreed, however, and refused to begin the film.  After being put on suspension, she eventually backed down, made the film, and even said she "loved working with David Niven and the precious baby."  In the end, Ginger's hesitancy about doing Bachelor Mother was proven wrong, for audiences were wild about it.  In fact, it was said to be "the best comedy of the year." [1] 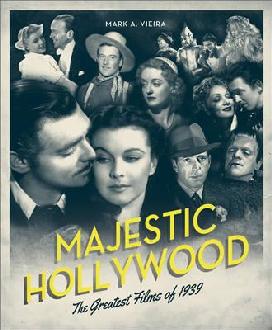 Classic Film Santa---in the form of my daughter---gave me this wonderful book for Christmas. It highlights 50 films from Hollywood's most glorious year---1939.  (For me, 1937 is neck-and-neck with 1939 as my favorite film year.)  While I've seen several of the titles highlighted in the book (including beloved favorites Gone with the Wind and Dark Victory), many more I've never seen (The Women and Of Mice and Men to name just two), and there are even a few films I've never heard of (such as Hollywood Cavalcade and Confessions of a Nazi Spy).

One of my film goals for 2014 is to watch all 50 films highlighted in this book.  No, I won't be reviewing them all, but I hope to review at least twelve of them---one per month.