February's "New to Me" Viewings

Sometimes, you just don't get to watch as many classic films as you would like.  In fact, sometimes, you feel like you're going into withdrawals for want of a great classic.  That's how this past month has been for me.  With the Olympics taking the bulk of my TV viewing time in February, I found myself watching only seven classic films the entire month.  All seven were "new to me" titles. 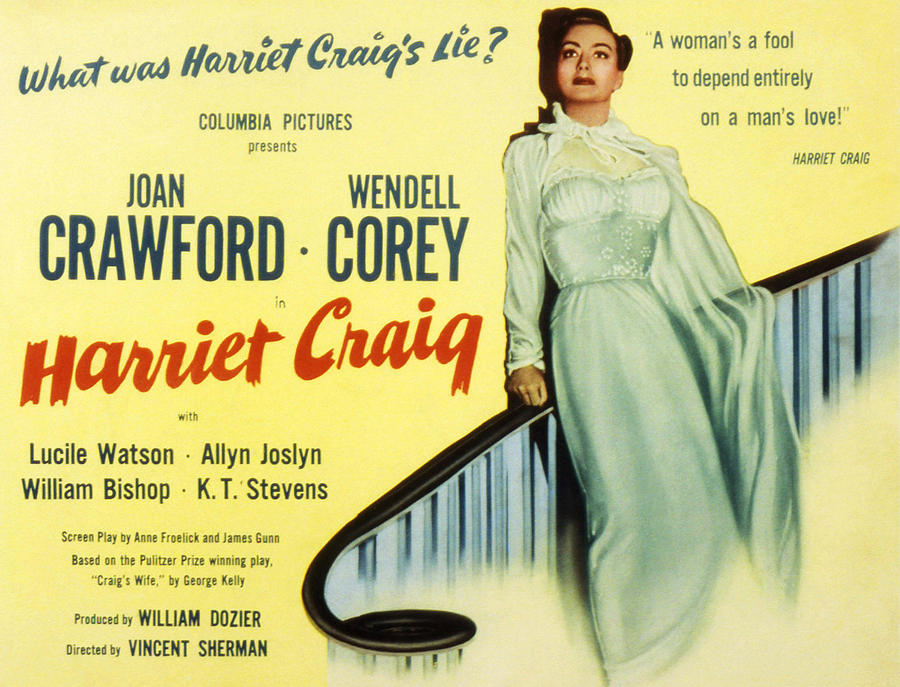 1.  Harriet Craig  (1950)  Starring Joan Crawford and Wendell Corey.  An overbearing, controlling woman seeks to run her household and her husband.  She lies, she manipulates, and she doesn't care if she ruins her husband's career...just as long as everyone in her life remains under her thumb. Wendell Corey seemed like an odd choice for a leading man, but I think he did fine in the role. Joan is her usual, wonderful, dramatic self. A solid, interesting, 3-star film. 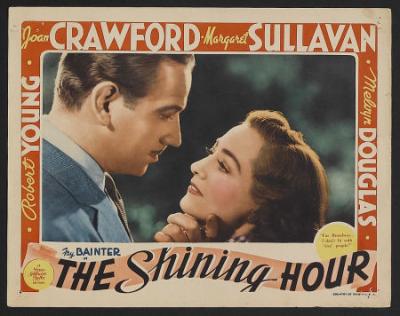 2.  The Shining Hour  (1938)  Starring Joan Crawford, Margaret Sullavan, Robert Young, and Melvyn Douglas.  A nightclub singer (Joan) marries society man Douglas, encounters opposition from his family (especially from his older sister, portrayed by Fay Bainter), then falls in love with his brother (Robert Young).  This wasn't a "hate-it, turn it off" film, but I wasn't overly interested in it and found it difficult to get through, so I'm giving it 2 stars. 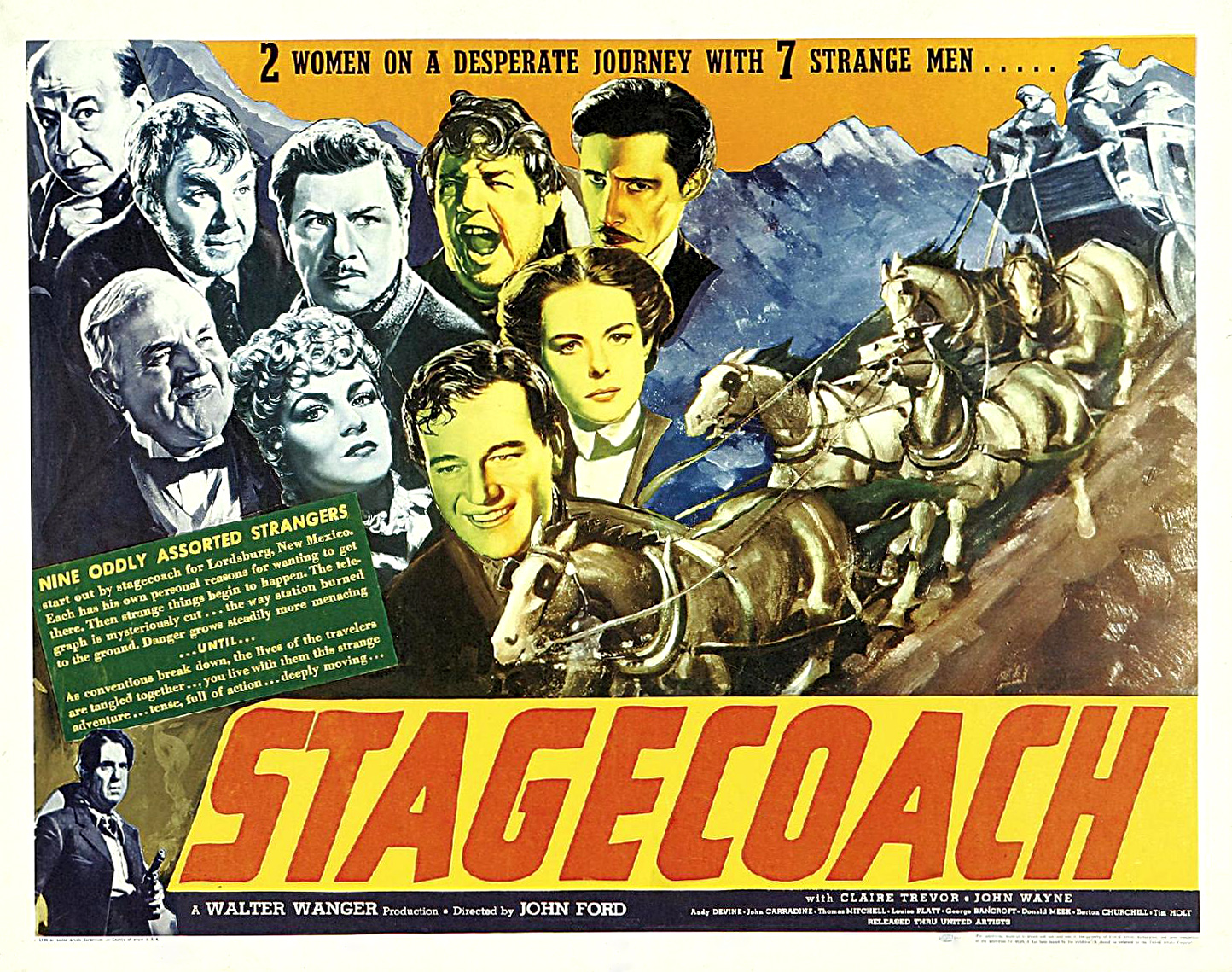 3.  Stagecoach  (1939)  Starring Claire Trevor, John Wayne, Andy Devine, and Thomas Mitchell. Yes, I finally caught this much-raved-about classic, which sees a a pregnant woman, an outlaw, a prostitute, a gambler, the town drunk, and a few others traveling together on a stagecoach through Indian country.  I'm going with 3 stars on this, but it's  more like 3.5, and I will admit that I am beginning to see John Wayne in a more favorable light (which I began to do after catching The Quiet Man last August). 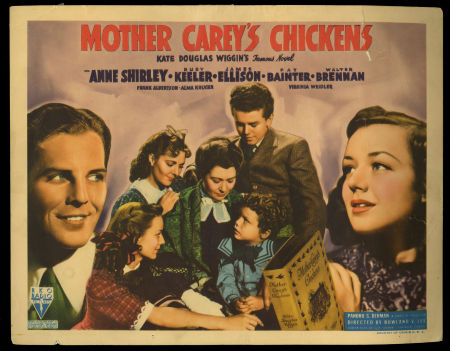 4.  Mother Carey's Chickens  (1938)  Up until yesterday, this touching dramedy was my best film discovery of the month.  Featuring the terrific ensemble cast of Anne Shirley, Ruby Keeler, James Ellison, Fay Bainter, Walter Brennan, and Frank Albertson, this charmer is definitely one I want to write about in a bit more depth, so expect a brief review in the next week or so.  I'm going with 3 stars on this, but it's very close to 4...definitely 3.5 stars. 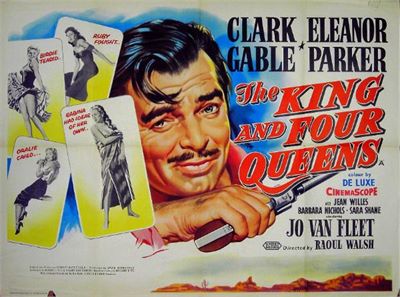 5.  The King and Four Queens  (1956)  Starring Clark Gable and Eleanor Parker, with Jo Van Fleet (and others) in support.  After learning that there is gold on their property, a con man moves in on a widow and her four widowed daughters-in-law.  Starved for a man's attention, all four women are drawn to the stranger, and that suits our hot-blooded Clark just fine.  Mother-in-law Jo Van Fleet, however, is determined that her daughters-in-law will not succumb to the man's charms. Although I love Clark Gable as he aged, I didn't care for this movie and give it only 2 stars  Just an aside...Jo Van Fleet is terrific in this role.  I caught her in Wild River last year, and her acting took the film from 4 to 5 stars for me.  She's not one of the well-known supporting players...but she ought to be! 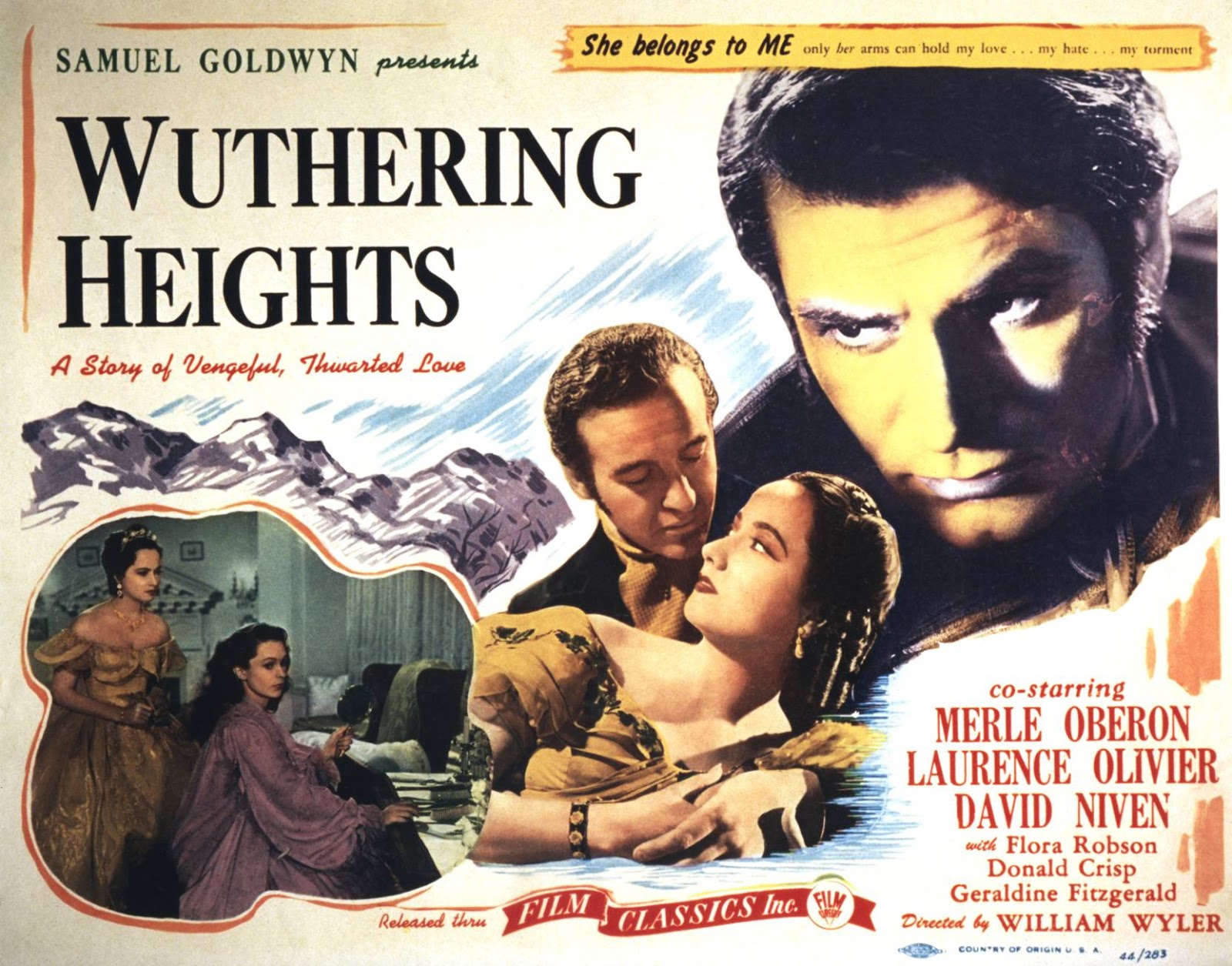 6.  Wuthering Heights (1939)  This is one of the films in the Majestic Hollywood book, so while I don't overly care for the story, nor do I care for Laurence Olivier, it was a film I had to watch.  It's the tragic story of Heathcliff (Olivier) and Cathy (Merle Oberon), who love each other passionately but who are kept apart because of Heathcliff's low social standing and Cathy's desire for status.  I am very middle of the road on this.  While the acting is terrific, especially that of Olivier, I never cared about either of the lead characters.  Cathy is incredibly selfish and proud, and Heathcliff is so brooding and angry that it's hard to have much sympathy for him.  I'm giving this film 3 stars---solid, enjoyable, liked it okay. 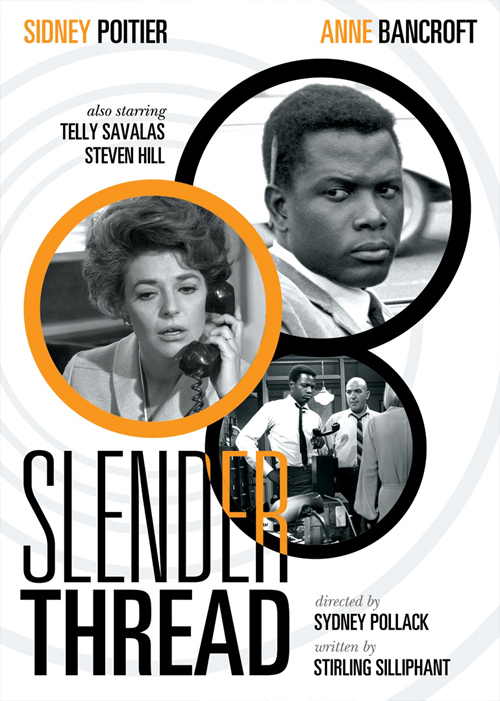 7.  The Slender Thread  (1965)  Starring Sidney Poitier and Anne Bancroft, this was my best film discovery of the month. It's a meaty drama which brings a crisis line volunteer and a suicidal woman together on the phone.  The acting is terrific---as is typical of anything starring the great Sidney Poitier.  I'm going with 4 stars on this.  (Read my review HERE)

With the Olympics behind us and a DVR full of several dozen unwatched titles, I expect that March will find many "new to me" films crossing my path.  I hope so anyway, because while I love watching tried and true faves over and over again, there is something quite exciting about catching a film for the first time.

Happy viewing!
Reviewed by Patti at 12:00 AM

Another of the films highlighted in Majestic Hollywood, The Greatest Films of 1939 is Golden Boy, a boxing drama starring Barbara Stanwyck, Adolphe Menjou, and---in one of his earliest film appearances---William Holden. Based on Clifford Odets' 1937 play, this Reuben Mamoulian film, which features Lee J. Cobb, Joseph Calleia, and Sam Levene in support, garnered a Best Music Academy Award nomination. 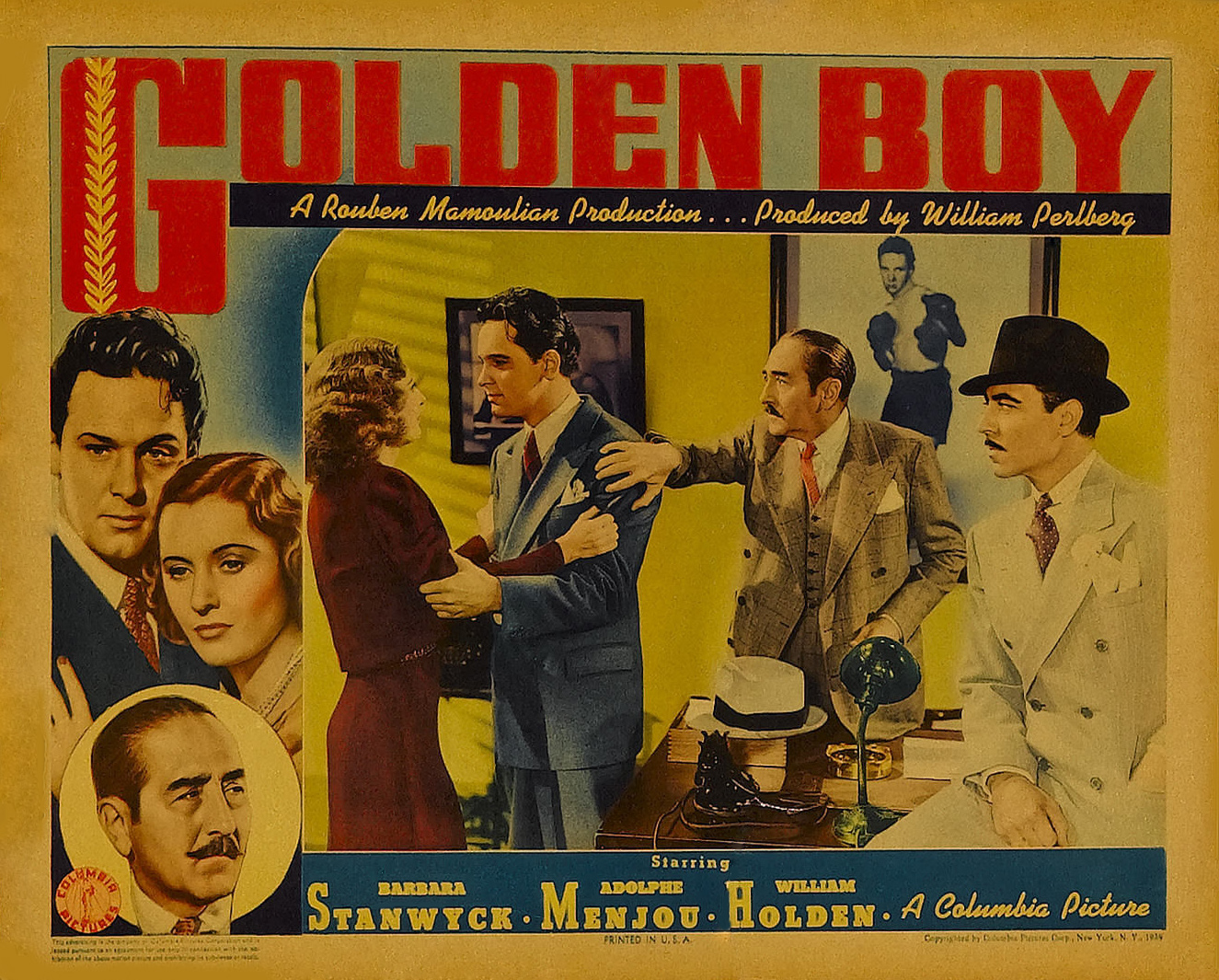 Joe Bonaparte (William Holden) is a sensitive young violinist, who lives with his father (Lee J. Cobb), sister, and brother-in-law above the family's grocery store.  Although Joe plays the violin beautifully and could possibly have a future in music, he wants to make money quickly and, therefore, begins boxing for Tom Moody (Adolphe Menjou).


Joe becomes an overnight sensation in the boxing ring, but since a violinist needs his hands and he could possibly injure his hands boxing, he talks about backing out.  Moody knows that he has a money-maker in Joe, though, so he's not about to let him walk away and, therefore, instructs his secretary/mistress, Lorna Moon (Barbara Stanwyck), to change Joe's mind. Joe has fallen in love with Lorna, and after she leads him to believe she loves him too and that there can be a future for them, Joe returns to the boxing world, much to the disappointment of his father.

Because Joe is such a sensation, he quickly attracts the attention of another promoter, one who promises him bigger and better things.  Joe jumps at the opportunity and leaves Moody's organization, which infuriates Moody and sends Lorna, once again, to Joe's side in an attempt to change his mind.

Joe soon becomes disillusioned with boxing....but does he quit?  Does he return to the violin?  Does he really love Lorna?  Does she really love him?  Those are the questions which play out in the balance of the film.

Though Golden Boy is not one of my favorite Bill Holden films (or even one of my favorite boxing films), it is a solid, interesting, well-acted drama, and it gives an opportunity to catch Mr. Holden before his star had begun to rise.  Although it's easy to see why he went on to become the star that he did, at the outset, it would have appeared that Holden's career was over even before it began. The seemingly-endless boxing lessons, violin lessons, and dramatic coaching were exhausting to Holden; according to Majestic Hollywood, "It was a dreadful period for the young actor, and he expected to be replaced at any time. However, Barbara Stanwyck believed in Holden and went to bat for him.  Telling Columbia boss Harry Cohn that he hadn't given the young man a chance, she promised to work with him. With Miss Stanwyck coaching him, Holden regained his confidence and was able to take direction from Mamoulian; after Golden Boy, Holden was suddenly in demand and on his way to a successful, Academy Award-winning career.  He never forgot Barbara Stanwyck's support and help; in years to come, he would always send her flowers on April 1, the anniversary of Golden Boy's first shooting day."  [1]

Beyond Bill Holden's performance, is that of Lee J. Cobb.  He is absolutely terrific!  He would reprise his role in 1952, when Golden Boy, again, played on Broadway.  Interestingly, in that production, one of my other great loves---John Garfield---would take on the Joe Bonaparte role.

Barbara Stanwyck is my #3 gal (sometimes even #2), and William Holden is one of my "terrific 10," so even though Golden Boy isn't a favorite, I do enjoy their pairing here.  They have great chemistry together.  I'm calling this 3 stars, but it's more like 3.5

Out on DVD, Golden Boy should be quite easy to track down.

First thing this morning, I learned the sad news that Shirley Temple had passed away at the age of 85.  America's little darling---especially through the difficult years of the Great Depression---Shirley brought a charm all her own to the big screen. Audiences loved her, and she was a top box-office draw for several years.  In fact, from 1935 to 1939, she was said to be the most popular movie star in America, with Clark Gable a distant second. Her films are sweet and sentimental, and they always make my heart smile.

My 5 favorites of Shirley's films are:


Rest in peace, darling Shirley.  You will be missed!!  But you will not be forgotten---thanks to all your wonderful films, you will be forever in our hearts!
Reviewed by Patti at 4:53 PM 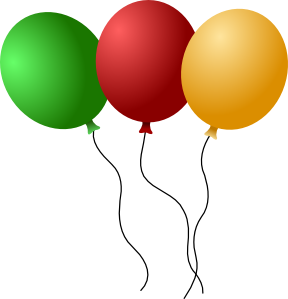 This past Saturday, They Don't Make 'Em Like They Used To celebrated three years of life. Though I've been blogging since early 2006, it wasn't until February 1, 2011, that I made the jump into classic film blogging, with a review of the lovely romantic drama Random Harvest. Prior to then, I had been sharing a weekly classic film review on my homemaking/decorating blog; however, desiring to write about classic films more often than once a week, I determined that a second blog was in order.  Alas, it is hard enough to keep up with one blog, let alone two; my homemaking blog ended up falling by the wayside in order for me to focus more on my classic film passion.

Sharing these great classic films, and all the elegant stars of old, has not only been an enormous pleasure, but it has afforded me the opportunity to connect with dozens of other classic film enthusiasts, some of whom have become very good friends.  While I've gotten busy with a genealogy/family history project and can't devote as much time to classic film blogging as I've done these past three years, I definitely intend to stay a part of the blog world and the wonderful classic film blogging community.  I love being here, and I enjoy all the friendships I've made.

A huge thanks to all my readers for making these last three years of blogging so enjoyable. Interacting with all of you has been such a pleasure.  I look forward to sharing more classic films with you---as I am able---in the months ahead.