The passing of our favorite stars is always a sad event, yet it becomes even more sad, when the death is sudden and takes us by surprise...or when the passing star is young and still in what we think is the prime of their life.  It is in memory of those stars---the ones gone far too soon---that Comet Over Hollywood is hosting the "Gone Too Soon" blogathon. 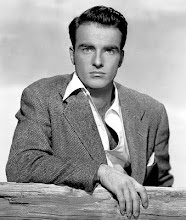 One such star who left this world much too soon is Montgomery Clift, who passed away at the age of 45.  (October 17, 1920 - July 23, 1966).  The fabulous Mr. Clift is not just on my favorite actor list---he is near the very top.  In fact, he has the honor of being one of my "beloveds."   I am quite wild about him, so I was thrilled to have the opportunity to "sing his praises" during this blogathon. 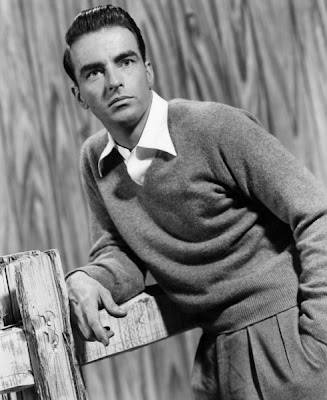 Though Montgomery "Monty" Clift's death date is officially listed as July 23, 1966, in many ways, he died ten years earlier in May of 1956, when he was involved in a car crash.  The single-car accident, which occurred after a party at his good friend Elizabeth Taylor's house, not only left his face partially paralyzed (and so dramatically altered that he took down most of the mirrors in his home), but it left him in so much pain that he lived his remaining years addicted to drugs and alcohol.  (Though he had problems with alcohol and drugs prior to that night, afterwards his use grew ever more intense.)  According to Mr. Clift's biographer, Patricia Bosworth, "he survived (the crash)...and lived for ten more years, but his real death occurred as he lay bleeding in Elizabeth Taylor's arms.  Nothing would ever be the same for him after that night."  Others have called Monty's death, "the longest suicide in Hollywood," because although the official cause of death was a heart attack, the reality is that years of alcohol and drug use had taken their toll on this amazingly talented man. 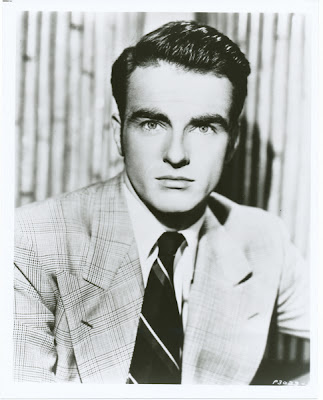 Prior to beginning his film career, Monty was a stage actor.  After taking part in an amateur production at the age of 12, his sights were set on Broadway, and from the time he was 14 until well into the 1940's, he performed on the stage, working with such greats as Dame May Whitty, Tallulah Bankhead, Sydney Greenstreet, Mr. and Mrs. Fredric March, and even a young Elia Kazan.  His acting was always praised---even if the play itself was a flop, most critics had positive words for Mr. Clift's performance. 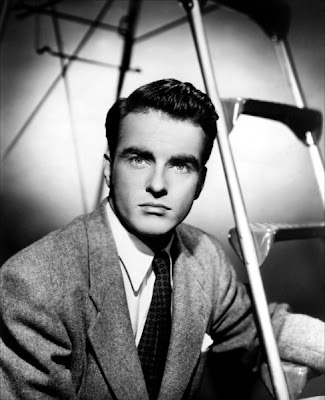 One of the most incredibly gorgeous men I have ever seen, Mr. Clift was indeed a truly brilliant actor.  What the critics saw in him during his years on the stage, they would continue to see as he moved to the screen.  In a film career of 17 films, he received three Best Actor Academy Award nominations and one Best Supporting Actor nomination; sadly, though, he didn't come away with any.  (For the record, I think he was definitely robbed in 1951.  My apologies to all you Humphrey Bogart/African Queen fans, but I think that year belonged to Monty for A Place in the Sun.)  Of his 17 films, I have seen 14, and I think he was totally stellar in every single one of them.  I will highlight a few of my favorites. 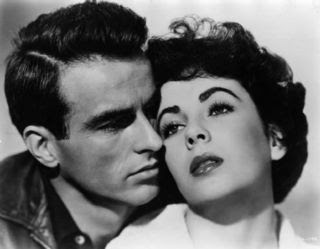 A Place in the Sun (5 stars), which I just reviewed yesterday (HERE), is one of my top 3 movies of all-time.  I absolutely love this movie.  It is one of those films which I always wish had a different ending than the one it has.   For this role, which saw Monty and director George Stevens arguing incessantly about the the final scene, the very diligent actor spent the night in the San Quentin death house.  Doing that was his way of preparing emotionally for the rigors of portraying a condemned man.

The chemistry between Mr. Clift and co-star Elizabeth Taylor was completely incredible in this film.  Though Hedda Hopper predicted marriage for the two of them, they were, in fact, only friends---very dear friends---for the remainder of Monty's life. I Confesss (5 stars) has the distinction of being my all-time favorite Hitchcock film, and, again, Monty was completely fantastic in his role.   Incidentally, his character in I Confess, Father Michael Logan, is one of my all-time favorite film characters...a man of honor and integrity, no matter the cost.  This role greatly excited Monty, because his character was one who was "faced with a terrible crisis."  In preparation for this role, Mr. Clift spent a week at a monastery in Quebec, memorizing the entire Latin mass and learning how to say the rosary and the Stations of the Cross.  Karl Malden, one of Clift's co-stars in this film, said of him, "Monty was marvelous in I Confess.  His ability to project mood and a held-back strength is quite extraordinary---it's a high point in the film."


I also totally love From Here to Eternity (5 stars---reviewed HERE), the film for which he received his third Best Actor Academy Award nomination.  His role of Robert E. Lee "Prew" Prewitt was another of those which, like Father Logan in I Confess, intrigued him because of the "terrible crisis" his character endured.  Fred Zinnemann, who had directed him in The Search, had long wanted Monty for this role; however, Columbia Pictures president, Harry Cohn, wanted Aldo Ray, and it wasn't until Zinnemann threatened to drop the project that Cohn agreed to Clift in the role.  Deeply immersed in the role of Prewitt, Monty carried a copy of the novel around and referred to it constantly, and the book grew tattered from its continual use.  For this film, Monty---who always set out to master something new for each of his roles---learned to play the bugle.

Although he made no sound on film, he wanted his mouth and throat movements to be as authentic as possible.  Also, in preparation for this role, he spent weeks boxing.  In the end, those things made his portrayal of Prew completely perfect---it was a performance of which he was proud, and for the first time, he was upset about not winning the Academy Award.  (William Holden won for Stalag 17 that year.) 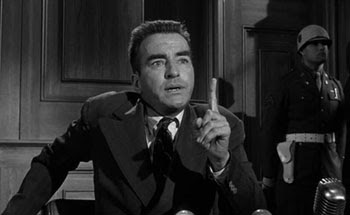 Judgment at Nuremberg (5 stars) is the film for which he received his final Academy Award nomination, for that of Best Supporting Actor.  Originally he was asked to consider the part which ultimately went to Richard Widmark, but in the end he chose the bit part of the mentally-challenged Jew, because he felt the role had something important to say.  His seven-minute performance in that film---for which he took no salary, only expenses---was totally brilliant...and heart-rending.  Without a doubt, I think he was Oscar-worthy there.


The Search, (4 stars---reviewed HERE), which was Monty's second film appearance, was considered by him to be "the most fulfilling artistic experience of his life."  Wanting to be completely prepared for his role, which garnered him his first Best Actor Academy Award nomination, Mr. Clift lived for a time in an army engineer's unit, dressed in army fatigues, and toured U.N. Relief and Rehabilitation camps in Germany.  He was totally driven to make his character and the film authentic, which resulted in numerous improvisations of the script and endless battles with the film's producer. In the end, though, the film received unanimous acclaim and Monty, who was pleased with his performance, became one of Hollywood's hottest stars. 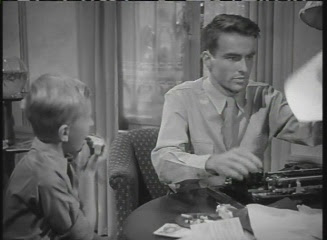 
Now a "hot commodity," Monty was soon approached by director Billy Wilder, who had written the script for Sunset Boulevard (my #4 movie of all-time), with Monty specifically in mind.  Originally excited about the project, Monty committed to it; however, while in Germany shooting The Big Lift, he received the final script, and he backed out, which then provided William Holden with the role.  Mr. Clift's biography states that he never regretted the decision to not do the film.  It was surmised by his agent that the decision to bow out was because the scenario too closely resembled the ("closely guarded at the time") relationship he had with the much-older-than-himself stage actress, Libby Holman.   While I completely adore William Holden and consider Sunset Boulevard to be his most brilliant work (and my favorite of his films), I can very easily see Montgomery Clift in that role. 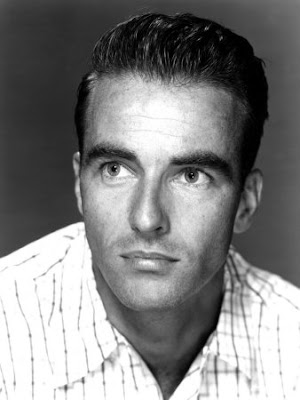 Much of Monty's tortured, troubled soul was the result of his sexuality.  While some have said he was gay, his brother, Brooks, maintains that he was, in fact, bi-sexual.  He had relationships with women---many of them---including a long relationship with the years-older Libby Holman.  Regardless of whether he was bi-sexual or fully gay, Monty was in deep agony for years about his sexual preference, and the guilt he carried consumed him.  Deborah Kerr, who starred with him in From Here to Eternity, said "He wanted to love women but he was attracted to men, and he crucified himself for it."  The agony of conscience, combined with his alcoholism, drug addiction, constant pain, chronic health problems, and extreme insecurity took their toll, and two months after completion of The Defector (one of his films I have not yet seen), at the age of 45, Mr. Clift departed this world.  His final resting place is in a small Quaker cemetery in Brooklyn, New York.

In preparation for this post, I read the book Montgomery Clift, a Biography, by Patricia Bosworth, (all quoted material is from that book, which was published in 1978).  This biography, which the author researched with help, in part, from Mr. Clift's brother, Brooks, is a fascinating---yet heartbreaking---read.  Troubled nearly all of his life, Monty doesn't appear to have ever really known happiness, and that breaks my heart.  (Though there are more recently-published Clift biographies on the market, to be quite honest, this one was graphic and heartbreaking enough.  I have no need or desire to read more current works, which most probably contain much greater ugliness.)

So, Mr. Montgomery Clift, as we remember the beloved stars who left this world much too soon, I can't help but remember you.  You were an amazingly fantastic actor---one of my absolute favorites---and you provided the world with many wonderful films.  Thank you for bringing such fabulous and powerful films to life!!
Reviewed by Patti at 12:00 AM