A Patch of Blue, from 1965, is a bold, powerful drama starring Sidney Poitier, Shelley Winters, and Elizabeth Hartman.  Probably considered quite controversial for its time, this hard-hitting film contains both ugly, explosive scenes and incredibly beautiful, tender ones.  I found myself lightly misty-eyed by the end of the film.

Selina D'Arcy (Elizabeth Hartman) is a young woman who, since being blinded at the age of five, has lived in a world of isolation and loneliness.  Sharing a dingy, one-room apartment with her drunken grandfather (Wallace Ford) and prostitute mother, Roseanne (Shelley Winters), Selina knows no love or warmth.  She is little more than a servant to the two elders and is continually verbally abused and told how worthless and ugly she is. 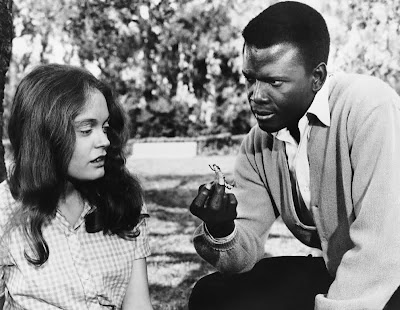 Yearning for some fresh air and sunshine, Selina escapes the prison-like apartment one day, when an acquaintance is willing to escort her to the local park.  She intends to spend the day there and then be escorted back home by her grandfather later that night.  While in the park, Selina meets Gordon Ralph (Sidney Poitier), a kind and caring man who comes to her aid after she is startled by a caterpillar falling down the back of her dress.  As Gordon spends time with Selina, he realizes that not only is she blind, but she has never been taught how to function in her blindness.  His heart goes out to her, and for the first time in years, Selina has kindness and caring lavished upon her.

Every afternoon, Selina meets up with Gordon at the park; before long, she is in love with him.  The only thing is, Gordon is a black man, and her mother has forbidden her to ever have anything to do with black people.  When Roseanne discovers Selina's relationship with Gordon, a violent, ugly scene results, and Gordon is more determined than ever to help Selina escape the ugliness and unhappiness of her home life.  Gordon, however, is getting the "stay away from the white girl" attitude from his brother.  So, what can he possibly do to help this young woman he has come to really care about?

The acting in A Patch of Blue is terrific.  Elizabeth Hartman (who I never heard of prior to this film) gives a very touching performance as the vulnerable, love-starved blind young woman.  She received a Best Actress Academy Award nomination for her work here.  Shelley Winters, who won the Best Supporting Actress Award for her role, was quite sensational.  And Sidney Poitier, always fantastic, was very solid and believable in this film.  He is becoming one of my favorite actors...I definitely want to see more of his work.

This film was actually quite bold for its time, and that is another reason I am giving it 4 stars.  While interracial romance is totally a non-issue to most all of us nowadays, in 1965, it was definitely unacceptable.  To make a movie in which a white girl falls in love with and kisses a black man had to really unsettle audiences.  I did read on Wikipedia (which means I don't know if I deem the information totally trustworthy) that when the film was released in Southern U.S. cities, the kissing scene between Poitier and Hartman was removed.  Even without the kissing scene, though, to have a white woman telling a black man she loved him in the mid 1960's was quite bold, and such boldness gives me an even greater appreciation for this film.

A Patch of Blue is a beautiful, tender story...a definite must-see film.  It's out on DVD, so it should be quite easy to track down.  Happy viewing!!
Reviewed by Patti at 7:45 PM