Guess Who's Coming to Dinner (5 stars)

Guess Who's Coming to Dinner, from 1967, is a racial issues romantic drama starring Spencer Tracy, Katharine, Hepburn, and Sidney Poitier.  Produced and directed by Stanley Kramer, this bold (for its time) film garnered ten Academy Award nominations, coming away with two wins, including a Best Actress statue for Katharine Hepburn.  In celebration of Mr. Poitier's February 20th birthday, I recently enjoyed a first-time viewing of this film. 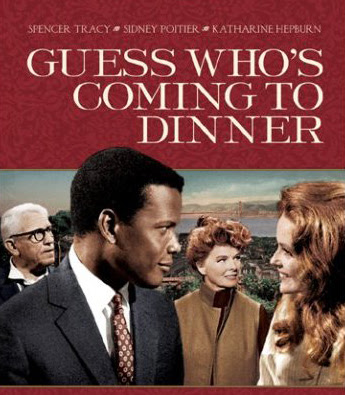 Joanna Drayton (Katharine Houghton) has arrived home unexpectedly from a trip to Hawaii; as if her earlier-than-planned arrival isn't unsettling enough, the white Joanna has a black man in tow with her...and he's not just any black man.  He is Dr. John Prentice (Sidney Poitier), a man she met ten days ago and whom she intends to marry.  Having been raised by parents who have always loathed racial discrimination, Joanna is sure her parents will welcome John into their lives with open arms. 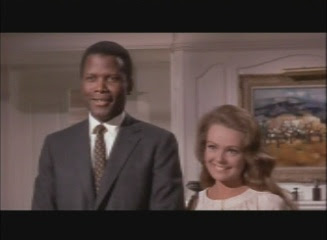 Surprisingly to Joanna, her parents (Spencer Tracy and Katharine Hepburn) are speechless at first, and it is not just because of the suddenness of her marriage plans.  Quite honestly, Joanna marrying a black man was something they had never even considered.  While her dad says his concerns are about the difficulties the multi-racial couple will encounter, is it more than that?  Does he really believe in equality as much as he has always claimed? 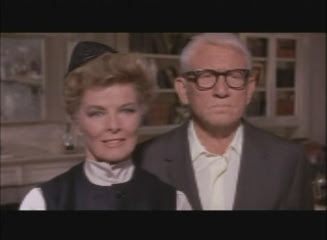 For his part, John, who has told his parents about the upcoming nuptials over the telephone, intends to inform them of his intended's race via a letter.  However, that plan changes when they decide to make the short flight from Los Angeles to San Franciso in order to meet their future daughter-in-law.  Their reaction is not much different than Joanna's parents' reaction, and as the two families, along with the Drayton's priest friend (played by the delightful Cecil Kellaway), prepare to have dinner together, there are sure to be fireworks.

While John and Joanna are adults and don't need their parents' permission to marry, they do desire to have their blessing.  In fact, John has vowed that unless Mr. and Mrs. Drayton give their approval, the wedding will not take place, as he doesn't want to be responsible for bringing estrangement to their always-close relationship.  How everything works out is the balance of the film.

Guess Who's Coming to Dinner is a wonderful movie and quite bold and ground-breaking for its time.  While the majority of people nowadays have zero problem with inter-racial marriage, audiences of the mid-to-late 1960's were definitely not on that page.  This had to be one of the most controversial films of the decade, and I would imagine that many people were furious at this film's message.

Not only is the subject matter of the film powerful, but so is the acting.  Both Spencer Tracy and Katharine Hepburn received leading actor/actress nominations, and Cecil Kellaway and Beah Richards (who portrayed Sidney Poitier's mother) received supporting actor/actress nominations.  Quite honestly, I'm not sure why Mr. Poitier was overlooked...he was totally fantastic in his role.  In my opinion, though, this really was Spencer Tracy's film (more than Poitier's or Hepburn's), and he's the one I think ought to have come away with the win.  He was beyond sensational in his role.  The expression he had on his face for the majority of the film was priceless.  And, wow, the look in Katharine Hepburn's eyes as Tracy gave his grand speech at the end of the movie was amazing.  Her eyes were glistening with tears, and it was easy to believe that it was her real-life love for Spencer which was spilling forth.  Very touching!!  The score of the film was beautiful as well.

This film is a little heartbreaking to watch because of the knowledge that it was Spencer Tracy's final role; in fact, he passed away just 17 days after filming had been completed.  Yes, he definitely went out on top, but seeing him so old and so close to death makes the film a bit sad for me.

One final thought...at one point, Sidney Poitier says to his father, "Dad, you think of yourself as a colored man.  I think of myself as a man."  I've said this before and I'll say it again, every single Sidney Poitier film I've seen, he is defined by his race.  Instead of simply portraying a man, he has always portrayed a black man, a man whose race is the overwhelming focus of the movie.  I wonder if he ever grew weary of those kinds of roles.  I wonder if he ever wished he could, like his character said, "just be a man."

Guess Who's Coming to Dinner is out on DVD, so it should be very easy to track down.  Additionally, it is on the TCM schedule for Saturday, May 12th.  I hope you get a chance to see it, because I think it is a definite must-see film.

Happy viewing!!
Reviewed by Patti at 6:00 AM