Middle of the Night (5 stars)

Last night, I had an evening to myself, so I poured a glass of merlot and sat down to enjoy one of my absolute favorite romantic dramas---Middle of the Night, starring Fredric March and Kim Novak. Based on Paddy Chayefsky's play and directed by Delbert Mann, this touching 1959 film, which is actually one of my 10 favorite movies of all time, explores a very controversial subject---that of a middle-aged man's romantic involvement with a woman less than half his age.  Although I reviewed this film here last July, I am so crazy about it that I felt it was time to re-work that post and thereby, hopefully, bring this lovely film to the attention of many others. 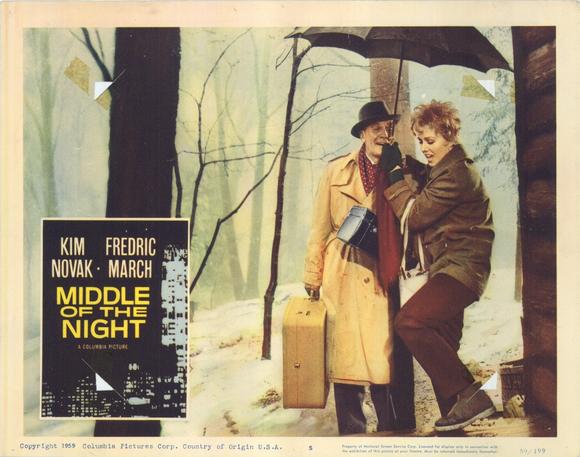 Jerry Kingsley (Fredric March) is a 56 year-old widower, with two 25+ year-old married children and two grandchildren.  Early on, we find that he has attempted to date again and, in fact, even asked the woman to marry him, but she turned him down and ended up getting engaged to someone else.  The pain and loneliness Jerry feels over her rejection is agonizing (especially to this viewer).

Betty Preisser (Kim Novak), a 24 year-old divorcee who works as a receptionist at Jerry's company, has some papers which Jerry is in need of, so he stops by her apartment to get them.  While there, he senses that Betty is distraught about something, and he offers the shoulder she needs as she grieves her recent divorce.  Although Jerry initially offers fatherly advice to Betty, he quite soon becomes interested in her romantically and asks her out to dinner. 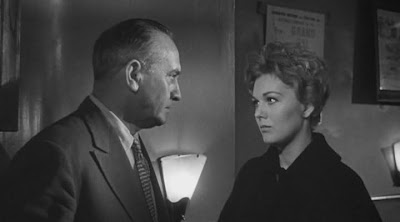 Initially concerned about the 30+ year age difference and fearful that one of them will be hurt, Betty is hesitant to continue seeing Jerry; however, he pushes her anxieties aside and suggests they get married.  At that point, their love is put to the test, for Betty's mother, sister, and friends think she's insane to marry an old man, and Jerry's family thinks he is making a total fool of himself, something he begins to believe as well.  How it all plays out is the balance of the film.


This controversial-themed movie is handled very tastefully.  I think it is an incredibly beautiful film, with completely spectacular performances by both Miss Novak and Mr. March.  Actually, I think this could possibly be the performance of Fredric March's career.  I am a huge March fan, and although The Best Years of Our Lives, which is one of the films for which he won a Best Actor Academy Award, may be slightly more beloved to me than this film, I think his performance in Middle of the Night is even more superior.  He is totally brilliant here!!  I could SO feel his pain as he struggled with the passionless existence expected of men his age.  Kim Novak is equally wonderful in her role.  If anyone wonders why I really didn't like her in her Marilyn Monroe-ish dumb blonde role in Phffft (reviewed last week HERE), this film will show why.  She was capable of so much more than that.  Miss Novak and Mr. March definitely click in this film.  Their chemistry is spot-on!

Bottom line---I think this film is totally awesome, and I highly recommend it.  Out on DVD as part of the Kim Novak Collection, it should be fairly easy to track it down.  Fans of Fredric March, Kim Novak, or May-December romances will not want to miss this one.