Strangers When We Meet (5 stars)

In less than a month, I have another addition to my 5-star film discoveries of the year, and shock of shocks, it is another Kirk Douglas film.  (Detective Story, reviewed HERE, just landed on that list about three weeks ago.)  The latest 5-star film discovery is Strangers When We Meet, a 1960 romantic drama starring Mr. Douglas, Kim Novak, Ernie Kovacs, Barbara Rush, and Walter Matthau.  Featuring a beautiful George Duning score, this very passionate film was one Net Flix recommended because of my interest in similar films. Wow, I am so glad for that recommendation, because I had never heard of this film prior to then. 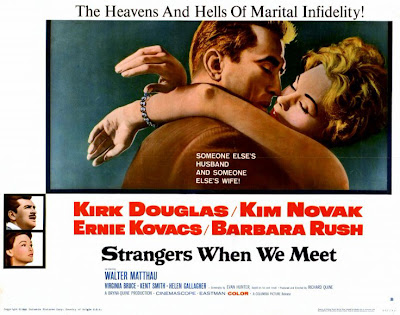 While delivering his son to the bus stop one morning, architect Larry Coe (Kirk Douglas) takes notice of Margaret Gault (Kim Novak), a newcomer to the neighborhood, also dropping her son at the bus stop.  After running into her again at the local market, Larry is definitely attracted to the beautiful woman, and he sets out to make her acquaintance by inviting her to accompany him to a a fancy new home he is building.  At first reluctant, Margaret (who Larry has decided to call Maggie) eventually agrees, and the two form a friendship, as she helps him take measurements at the property.

On the homefront, Maggie and her mother have an icy relationship, the result of her mother's infidelity during her marriage to Maggie's father.  Though her mother says that what happened to her could happen to anyone and that she hopes Maggie will really fall in love someday, Maggie insists that she is in love with her husband.  Husband Ken (John Bryant), however, has no romantic interest in his wife.  Even when Maggie goes to him seductively, Ken is more interested in washing and changing than in being intimate with his wife.

Feeling unloved and undesirable, Maggie ultimately ends up seeing Larry again.  Telling Ken she's going out with friends, she meets Larry at an out-of-the-way restaurant, where he soon tells her that he wants to make love to her.  Guilty and frightened, Maggie attempts to stop things before they start, but because she wants Larry as much as he wants her, she surrenders to him, and they embark on a passionate affair, eventually falling deeply in love with one another.

Although the lovers meet at the house Larry is building, it turns out that their relationship has begun to be suspected.  Not only does a mutual friend have suspicions, but Larry's wife is about to get wise too.  How it all plays out is the balance of the film.

This is a very interesting, passionate, well-acted film.  Kirk Douglas is completely super in this role.  I know very little of him, having seen (I think) only one of his films (Detective Story, in which I thought he was sensational), but I have to admit that I am very impressed with his acting abilities. Kim Novak does a terrific job as well.  Her performance here is even better than her performance in Middle of the Night (reviewed HERE).  I could so feel her longing to be faithful to her marriage vows, yet wanting so much to be loved and desired.  She was a wife in torment, and she played the part beautifully.  The icing on the cake was the incredibly gorgeous musical score.

Out on DVD, Strangers When We Meet should be fairly easy to track down.  Kirk Douglas, Kim Novak, or romantic drama fans ought to love this.