In honor of Robert Taylor's August birthday, I decided a re-watch of my favorite of his films was in order.  That film is 1940's Waterloo Bridge, a beautiful Mervyn LeRoy-directed romantic drama which pairs Mr. Taylor with Vivien Leigh.  Tender and touching and very much a tearjerker, Waterloo Bridge is not only my favorite Robert Taylor film, but it has made the jump from being one of my 20 all-time favorite movies to one of my 10 all-time faves.  Though I've reviewed it here before, that was way back when I first started this blog, so in celebration of Mr. Taylor's birthday, I decided to re-work that post a bit. 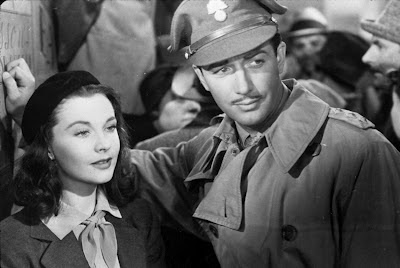 The story is set in England during the first world war.  Vivien Leigh is Myra, a beautiful ballerina, and Robert Taylor is Roy, a soldier home on brief leave. After a chance meeting in the middle of an air raid, the two fall in love and, in whirlwind fashion, plan to be married. Unfortunately, before they are able to wed, Roy is called back to the front, and because she had missed a performance in order to bid Roy goodbye at the train station, Myra is fired from her job.  A few months later, Roy is reported as having been killed in battle, and at this news, Myra spirals downward. Devastated by his death, without hope, and now jobless and destitute, she falls into prostitution. In typical melodramatic fashion, of course, Roy is not dead at all, and he soon returns to town. Myra happens to run into him at the train station...as she is seeking that evening's pickup.

Amazingly, Roy has no idea that Myra is not the innocent girl she once was, and he fully intends to finalize their marriage plans. Alas, though, the shame over what she has become eats Myra alive.

Will Myra tell Roy of her actions during the war? Will it change his feelings for her? Will they get married after all? The answer to all those questions will play out in the remainder of this beautiful, but tragic, film. This film is a remake of an early 30's film of the same name. I have never seen the original version, only this one, so I cannot compare the two.  If any of you have ever seen the original, I'd love to hear your thoughts about it.  This particular film is out on DVD and should be fairly easy to track down.  Additionally, it is on the TCM schedule for Monday, November 5th, at 11:45 a.m. (ET).  Do try to catch it if you can.  I completely love this movie and deem it a definite must-see.