It was last June, in honor of Audie Murphy's birthday, that I discovered The Gun Runners, and while I reviewed it then, since it is one of my two (so far) favorite Murphy films, it would be totally remiss of me not to spotlight it while he is star of the month.  Besides, while my first viewing of this film found me rating it 4---and very close to 5---stars, repeated viewings have definitely moved it into the 5-star "love it" category.  (Alas, since I "discovered" this film last year, it will not be part of my "5-star film discoveries of 2013.")  So, without further ado, here is a revision and expansion of my review of The Gun Runners. 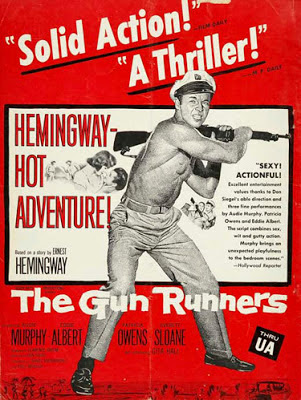 The third film adaption of Ernest Hemingway's To Have and Have Not is 1958's The Gun Runners, starring Audie Murphy and Eddie Albert.  Directed by Don Siegel, this film, which features Patricia Owens and Everett Sloane in supporting roles and introduces Gita Hall (in the first of her two films), is my second favorite version of the Hemingway story (John Garfield's The Breaking Point is my absolute favorite). 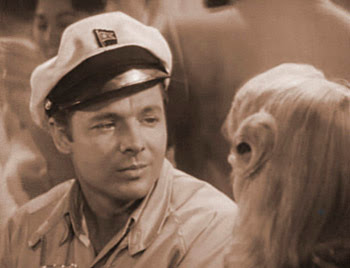 Living in Key West, where he runs a charter fishing service with his boat, the Lucy M, is former Navy man, Sam Martin (Audie Murphy), a good guy who doesn't have it in him to do wrong. Though finances are a constant struggle, he and his wife Lucy (Patricia Owens) are happy and very much in love. 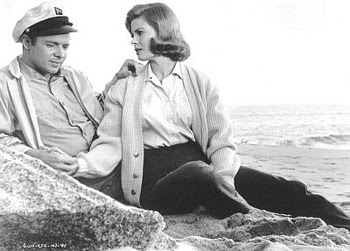 After failing to be paid close to $1,000 for a job, Sam hits a local casino, where his financial burden comes to the awareness of craps player Hannigan (Eddie Albert), who hires Sam to take him fishing. 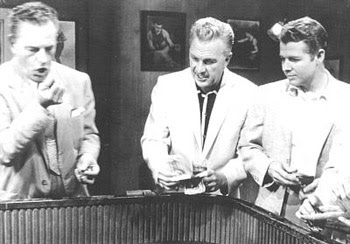 Accompanying Hannigan on the excursion is Eva (Gita Hall), and though she puts the moves on him, Sam has no intention of cheating on his wife.  (The lines he uses to decline her advances are the exact same ones John Garfield uses to turn down Patricia Neal in The Breaking Point.) 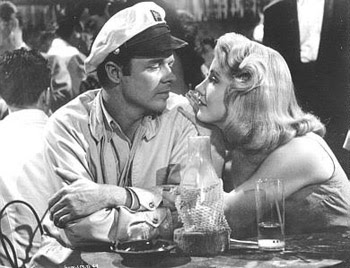 Using the fishing excursion only as a ploy, Hannigan's real destination is Havana, where he has arranged a meeting with a band of Cuban revolutionaries.  After an eventful night--in which Hannigan shoots a man---Sam returns to Key West, completely determined to avoid any future contact with his lawbreaking passenger and the political unrest in Cuba. 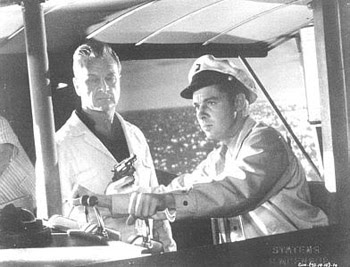 However, when the mortgage on the Lucy M is bought by Hannigan, Sam has no choice but to do the man's bidding.  Behind on his payments, Sam finds his boat in foreclosure, and the only way he will be able to get her back is to deliver Hannigan---and the guns he is supplying the revolutionaries---to Cuba...something he absolutely does not want to do.

Will this man, who doesn't have it in him to go bad, go bad after all?  How it all plays out is the balance of the film.


As stated above and discussed HERE, John Garfield's The Breaking Point is my absolute favorite version of this story (and the most faithful to Mr. Hemingway's work).  The Gun Runners, though, is easily my second favorite (and not far behind The Breaking Point), leaving the Bogey/Bacall adaption as the one I like the least (and a 2-star film for me). Sacrilege, I know, but To Have and Have Not just doesn't do it for me.  Oh, I readily admit that Bogey and Bacall have amazing chemistry, but the story itself doesn't touch me at all.  I don't care about any of the characters, and both times I watched the film, I found myself longing for it to end.  The Gun Runners, though, as with The Breaking Point, I completely and totally love.

Because I don't care for To Have and Have Not, I very nearly didn't even give the other two adaptions a try. It was only because of my determination to see John Garfield's entire filmography that I bothered with The Breaking Point, and I must be honest, I wasn't expecting much. Wow, would I have been missing out if I had skipped it, for it immediately became my absolute favorite John Garfield film (still is).  Because of that positive experience, and because I like Audie Murphy, I took a chance with The Gun Runners, and as with The Breaking Point, I was so glad I did.  I was wild about it, and it immediately shot to the top of my "favorite Murphy films" list.  Repeated viewings have only served to increase my love for it.

I completely adore Audie in this film.  Besides loving his character, I love his look.  In his early 30's here, his face has matured from his earlier Westerns, and he is incredibly handsome. Acting wise, while Audie Murphy was no John Garfield, he is extremely solid in this role---I find him to be just as believable as Garfield; and with his soft-spoken demeanor, Mr. Murphy brings a different kind of vulnerability to the character than Garfield does. The film's storyline is interesting, exciting, and thought-provoking, the characters are memorable, and the playful, romantic interaction between Murphy and his wife is very sweet---it's not often you get a chance to see a romantic side of Audie. (The same playful interaction occurred between John Garfield and wife Phyllis Thaxter in The Breaking Point, and I loved it there as well.) 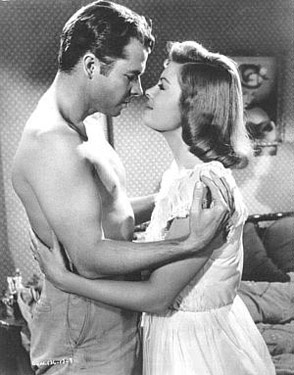 Eddie Albert is terrific in his role as the "heavy."  Who knew he had that kind of stuff in him?  I sure didn't.  He is about as far from Green Acres' Oliver Wendell Douglas here as he is from the moon!  Taking on the Walter Brennan/Juano Hernandez role here is Everett Sloane, and he puts in a good performance.  I'm not familiar with Patricia Owens at all, but she is sweet wife material.  I really like her in this role.  Plus, she and Audie have great chemistry together.

All these things work together to make The Gun Runners a 5-star "love it" film for me.  If you are a fan of Audie Murphy, you will definitely want to see this.  Also, if you've read the Hemingway story, you might want to watch this and see how it compares.

Out on DVD, The Gun Runners ought to be fairly easy to track down; plus it is available through instant viewing on Net Flix.  I do hope you get a chance to see it, as I think it is terrific!