Another of my 5-star film discoveries of 2013 is 1957's Edge of the City, a hard-hitting racial issues/union corruption drama starring John Cassavetes and "man of the month" Sidney Poitier.  The film, which features Jack Warden and Ruby Dee in supporting roles, was originally a TV movie entitled A Man Is Ten Feet Tall.  The part was written with Sidney Poitier in mind. 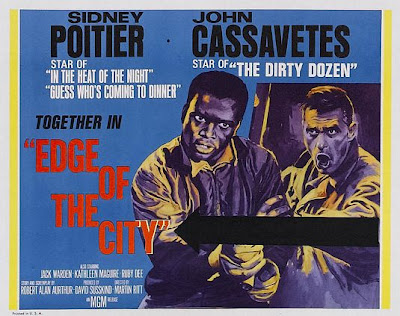 Looking for work in a New York railroad yard is drifter Axel North (John Cassavetes).  Through a former friend, Axel has a contact at the rail yard and is soon hired on. 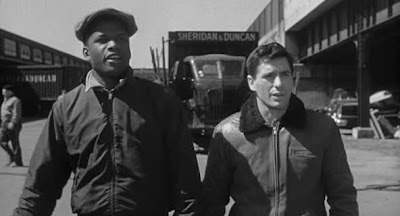 Axel's contact---the corrupt Charlie Malek (Jack Warden)---rules the roost at the yard and demands a kickback from Axel for getting him the job.  Additionally, he forbids him to have anything to do with Tommy Tyler (Sidney Poitier)---another employee who has been friendly to Axel.  Though Malek never outright says so, it is obvious that his contempt for Tommy is because he is black. 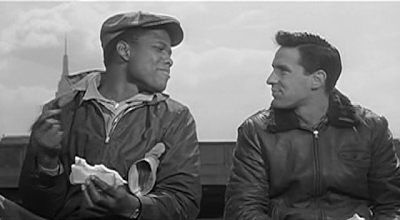 Despite Malek's warnings to stay away from Tommy, Axel goes to work on Tommy's crew, and the two men become very good friends. 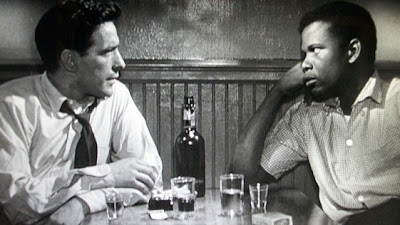 As Axel spends time with Tommy and his wife, Lucy (Ruby Dee), they set him up with one of their friends, and while on a date one evening, Axel is approached by a man claiming to know him from somewhere...something which Axel denies.  Although Axel attempts to explain his behavior, it would appear that he is hiding something. 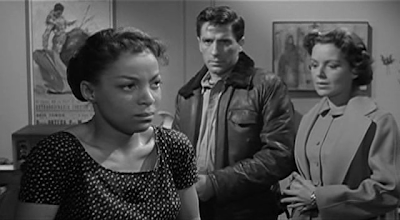 Deeply troubled by his past---and trying to hide his true identity, lest he be discovered and sent to prison---Axel finds himself at Malek's mercy.  Having discovered Axel's secret, Charlie demands a larger kickback from him; he also insists that Axel leave Tommy's crew and join his instead...failure to do so, and the gig is up.   A friend in every sense of the word, Tommy steps in to help Axel out of his difficulty...an action which infuriates Charlie and results in tragedy.

As with nearly every Sidney Poitier film I have ever seen, this is an intense, hard-hitting drama, featuring sensational acting...John Cassavetes and Mr. Poitier are both stellar in their roles.  Jack Warden is appropriately nasty and quite good as "the heavy."  Ruby Dee is terrfic as well.  Her final scene with Mr. Cassavetes is riveting.  The film's score is dramatic and quite adds to the mood.

Portraying a black man and a white man as good friends was bold for 1957, as was having the black man as the white man's workplace superior.  For those reasons, Edge of the City did not play in the American South, thus making it a poor money-maker.

To  my knowledge, this film is not out on DVD; however, it is on the TCM schedule for Thursday, March 28th, at 8:00 p.m. (ET).  If you are a fan of either Sidney Poitier or John Cassavetes, you won't want to miss it.