Another one of my 5-star film discoveries for this year is To Sir, with Love, a 1967 drama starring man of the month, Sidney Poitier.  Filmed in England, this film features a British supporting cast---Christian Roberts, Judy Geeson, and Lulu among them.  James Clavell (of Shogun fame) wrote the screenplay and produced and directed the film, which, like Blackboard Jungle twelve years earlier, finds Mr. Poitier surrounded by delinquent students in a high school classroom. 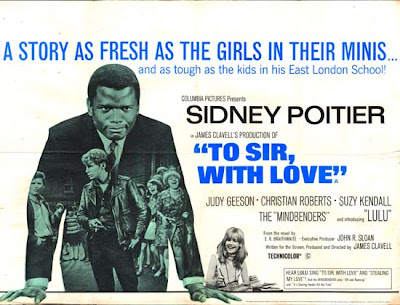 Unable to obtain a job in his career field, engineer Mark Thackery (Sidney Poitier) relocates to London, where a teaching job in an inner-city school awaits him.  Though Mark has never taught before, and despite warnings that the students are rebellious rejects from other schools, he, nevertheless, accepts the position.  Knowing the behavior of the students in Mr. Thackery's classroom, another teacher jokingly refers to Mark as a "lamb for the slaughter." 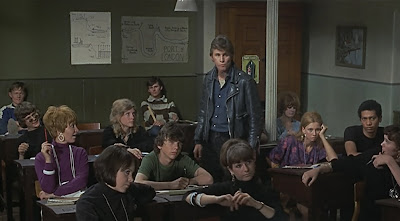 Stepping into the classroom, Mark is transported to a wild, unruly, uncooperative world. Disrespect for authority---and even for one another---is the norm for the students.  They swear, throw things from windows, create disturbances, and---Mark soon discovers---the majority of them can barely read. 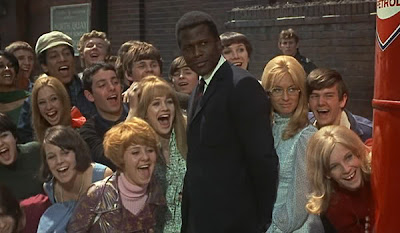 Idealistic and wanting to help the kids become mature, responsible, properly-behaving adults, Mark strives for a way to reach them.  Since traditional methods won't work with this bunch of rebels, he'll need to try a different approach.  How Mark turns a group of wild hooligans into a class of respectful, caring students will play out in the remainder of the film.

To Sir, with Love is a wonderful movie, with terrific acting by everyone.  Mr. Poitier, of course, leads the pack, giving his usual brilliant performance.  I really loved him in this role, which, incidentally, is one of the few in which his race isn't central to the story.  Also played perfectly were the student parts---especially Pamela (Judy Geeson) and Denham (Christian Roberts).

In some ways, To Sir, with Love is like Mr. Poitier's earlier classroom film, Blackboard Jungle---only this time, Sidney is the teacher, not the delinquent.  (Glenn Ford is the teacher in that film.) Both films feature a teacher who won't give up...who won't throw in the towel...who will do whatever is necessary to make a positive impact on his students.  They're both terrific films about the life-changing role a teacher can have.   What took To Sir, with Love from 4 to 5 stars for me is its beautiful sentimentality.  The final few minutes, which feature student Barbara (Lulu) singing "To Mr. Thackery (Sir), with Love," really touched me.  I vaguely remember this song from childhood (I was 6 when it was popular), but hearing it in context with the film gives a whole new meaning to the lyrics.  They're powerful, heart-tugging, and tear-inducing.

Mark had cared...and that caring resulted in them caring, and that was very touchingly portrayed in the final few minutes.  Quite honestly, I think To Sir, with Love is the quintessential teachers' movie.  Sure it's a 45-year old film, but its message is timeless.

The film is out on DVD, and it is also on the TCM schedule for Sunday, April 14th, at 1:30 p.m. (ET).  If you like Sidney Poitier---or inspiring movies---you ought to greatly enjoy this.