One of my favorite online social forums is The Golden Age of Hollywood (HERE), and it is through there that I met today's guest.  Mad, as she likes to be called, is one of my dearest friends over there.  She hails from Canada, and though she would be too humble to say this about herself, I certainly think it is the truth---she is the biggest Claude Rains fan on the planet.  Given that both Mr. Rains and Mr. Garfield were initially stage actors, they knew each other well; in fact, Mr. Garfield has said that Claude Rains was rather a mentor to him as he transitioned from stage to screen.  The two men appeared together in several films, including the little-known Saturday's Children, which is one of the few Garfield films I have yet to see.  In true #1 fan form, Mad has seen Mr. Rains' entire filmography, which means Saturday's Children has crossed her path, and it is that film she will be showcasing here today.  It definitely sounds like a "must see" film to me!  (Of course, I'm on a quest to see every Garfield film, so I guess, they are all must-sees.)

I'm thrilled to have Mad as my guest, so without further ado...I'll turn things over to her.

I am often surprised to discover classic era films of true quality that have somehow sunk into obscurity.  Saturday’s Children is one of these little-known gems.  To begin with, the film has an excellent pedigree.  The script was written by Julius and Philip Epstein (Casablanca, Four Daughters, Mr. Skeffington), from the Pulitzer-winning play by Maxwell Anderson (What Price Glory, Key Largo).  It’s directed by Vincent Sherman (Mr. Skeffington, Old Acquaintance), with Irving Rapper as dialogue director (later to direct Now, Voyager and Deception).  In addition to having a great cast, it’s also one of those rare treasures – a John Garfield comedy. 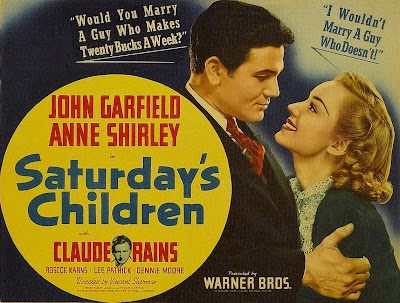 Our story begins with an average morning for the Halevy family.  Dad (Claude Rains) is resisting Mom’s (Elisabeth Risdon) efforts to get him out of bed to go to his dull job as a bookkeeper.  Meanwhile daughter Bobby (Anne Shirley) is excited about her first day of work at the same firm (where Dad has got her a job).  Sharing their New York brownstone is her older sister Florrie (Lee Patrick) and Florrie’s husband Willie (Roscoe Karns).  When she’s not trading wisecracks with Willie, Florrie is trying to educate Bobby in the ways of the world – particularly concerning the battle of the sexes.  To Florrie’s dismay, Bobby is resistant to what she feels are dishonest tricks for landing a husband.

At work, Bobby meets fellow employee Rims Rosson (Garfield), whose hobby is inventing crazy gadgets that he admits are not ‘commercially practical’.  He does have one practical dream - to discover a way to manufacture silk from hemp.  It’s obvious from the start that Rims and Bobby share the same wry sense of humour and directness, and they begin dating as part of a weekly bowling night.  When Rims gets a job offer in the Philippines to work on his hemp-to-silk idea, Florrie convinces Bobby that she’ll lose him unless she takes certain ‘foolproof steps’ to get him to propose.  Further complications ensue for the young couple, with some dramatic turns that I would rather leave viewers to discover for themselves. 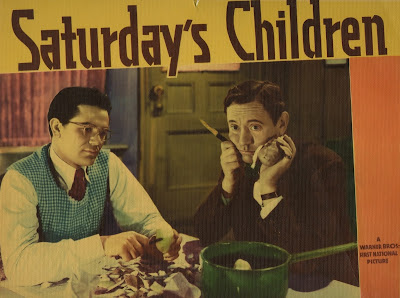 By this time, Garfield had made eight movies, playing a street-smart tough guy in most of them.  Here he plays a rather distracted, guileless fellow, who wears glasses to read and is slightly awkward at the dating game.  He is attracted to Bobby because of her straightforwardness.  Rims is an eccentric soul with a quirky sense of humour and a positive outlook on life.  It’s a marked contrast to some of the hard-bitten roles we have seen him in, but Rims is no weakling and Garfield still creates a fascinating three-dimensional character.  In Rims, Garfield shows us a more casual, easygoing type.  He’s no stranger to disappointment, but he’s a realist - not a cynic.  It’s a rare joy to see Garfield get to play this relaxed character with a sense of humour.  He’s a bit of a dreamer, and definitely a person you would enjoy getting to know.

Garfield is well matched by Anne Shirley as Bobby – torn between a selfish (but normal) desire to keep Rims with her, and a feeling of guilt that she is preventing him from pursuing his dreams.  She’s not only cute and likeable, but I was impressed with her as an actress in this movie – she often gets to be the ‘strong one’ for those around her.  (I’ve read that Warners originally wanted Priscilla Lane, but fearing it would be rewritten as another ‘Lane Sisters’ movie, Garfield lobbied for Anne Shirley.)

This movie is a romantic comedy with an intelligent storyline.  What I love about these old Warner Brothers pictures is that they show average people struggling to get by, and still managing to find happiness.  Not being rich isn’t seen as a tragedy to be ‘solved’ in the last reel.  The characters cope in the best way they can, without a lot of self-pity and in ways that ring true.  The title refers to the poem predicting the traits of children according to the day of the week on which they were born, in which “Saturday’s child has far to go”.  (The usual version is “… works hard for a living” but the spirit is the same.)  Money troubles may be the catalyst, but the couple’s problems are really about honesty and compromise in love and marriage.  Their story isn’t maudlin or sappy; their joys and pains are those we can relate to, and we laugh with them as if it were our own family.  A quality script has a lot to do with this, but ultimately it’s Garfield and Shirley that bring these characters to life and make us care. 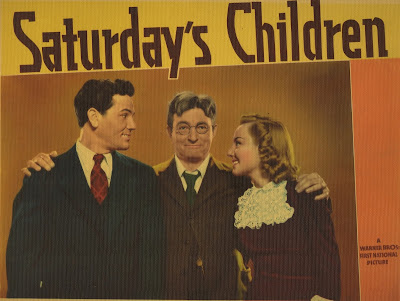 The supporting cast has some stellar character actors, including my own personal favourite – Claude Rains.  Rains and Anne Shirley have a wonderful chemistry as father and daughter.  Their scenes together are affectionate and heartwarming.  Always a commanding presence, Rains was a master at intelligent emotional scenes.  His heart-to-heart talks with Bobby about regrets in his own life are touching and honest, without being over-sentimental.  His ‘Pops’ is a complicated mix of cheerful resilience and melancholic resignation.  Rains also had a fine comedic sense; often a witty and sarcastic villain, here he is charming and funny as a teasing, loving father.  (I once read a comment that, with the exception of Lon Chaney Jr. in The Wolf Man, Rains always had daughters in the movies - often four at a time!).  This was the fifth picture Rains and Garfield were in together, continuing a friendship that began when Rains mentored him on Four Daughters. 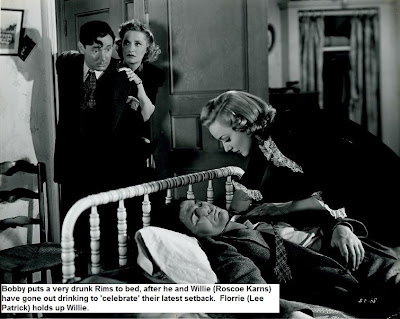 Lee Patrick and Roscoe Karns share some of the funniest of the Epsteins’ lines, with Patrick as the big sister always trying to ‘help’ with Bobby’s love life, and Karns as her henpecked husband who fights back with wisecracks.  They complement each other perfectly and their banter is fast and clever.  Their underlying affection is quite believable, and that’s probably why it’s so much fun to watch them bicker.  There is more witty dialogue at work, from Bobby’s fellow clerk Dennie Moore and her hapless boyfriend George Tobias.  Elisabeth Risdon (as the mother) is the only one not given much to do; although sympathetic, she never seems to be consulted on the family’s emotional crises.

I have read that Saturday’s Children was one of Garfield’s happiest film experiences, and a performance of which he was very proud.  I can see why – it’s sweet, it’s funny, and it gave him a chance to show his versatility as an actor.  Unfortunately, it wasn’t a success at the box-office, which may be why it’s not well known today.  It does not seem to be available on DVD, but if you have access to TCM in North America, you can catch it on March 4th at 8:45 am (ET), and I heartily recommend that you do.  It deserves to be re-discovered.


Saturday's Children does, indeed, sound like a terrific movie, and I cannot wait to see it.  A huge thank you to Mad for this awesome write-up!  What a fantastic addition to the blogathon! To read all the other terrific blogathon pieces, go HERE.

NOTE:  After finally having a chance to watch this film, I am giving it 4-stars.
Reviewed by Patti at 12:00 AM

There are many wonderful blogs out there in blogland---and so little time to read them all. Therefore, I am truly humbled that you took the time to not only stop by my little place in the blogosphere, but to share your thoughts as well. Thank you for visiting...and for commenting. I hope your visit here was enjoyable and that you will return again soon.