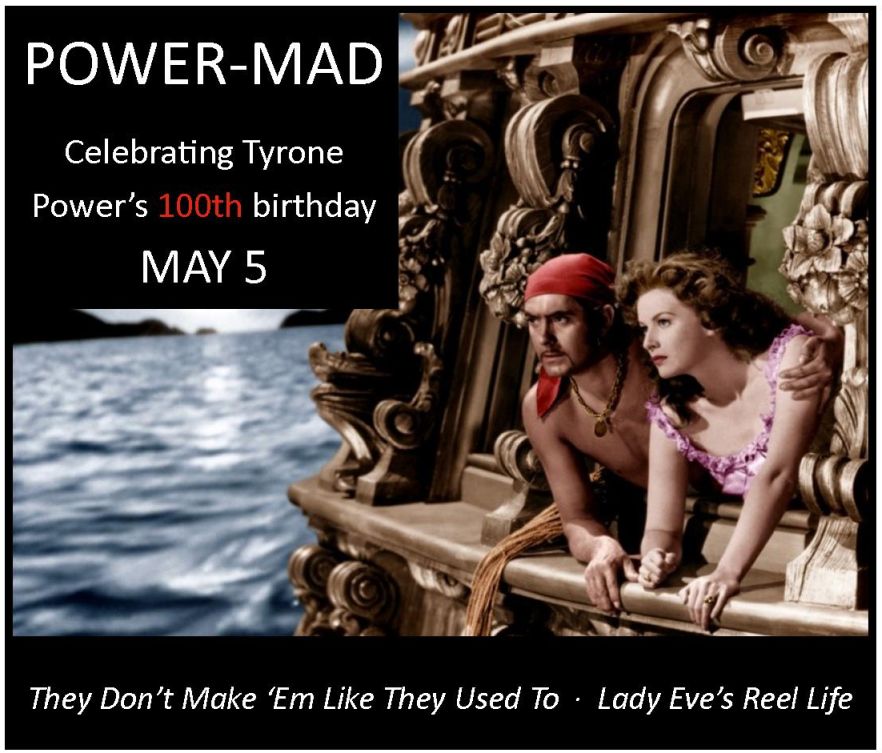 After several weeks of planning and anticipation, Power-Mad---the eagerly-awaited Tyrone Power 100th birthday blogathon---is finally upon us.  Monday, May 5th, we'll be celebrating one very under-appreciated actor, and I, for one, am thrilled.  Mr. Power so deserves the honor and recognition. (Participants, please include a link to this page somewhere in your post, and then either leave as a comment or email me or my co-hostess (Patty, the Lady Eve) the link to your article, so we can include it on the page.)

Participating in the event are two dozen Tyrone Power enthusiasts.  With swashbucklers, romantic comedies, Westerns, and dramas being highlighted, we're sure to get a great cross-section of Power's film career---hopefully, you'll discover several titles you want to track down. Also, Maria, of the Tyrone Power website, will be giving us a glimpse into her incredible memorabilia collection. This is sure to be a fantastic event, so I hope you get a chance to visit all the entries (even if it takes all week to do so!).

The contributors are as follows:


A huge thanks to my co-hostess, Patty, of The Lady Eve's Reel Life.  Actually, Patty was much more than a co-hostess---she did the lion's share of the work for this event, including creating the blogathon's beautiful banners.  It was a real joy getting to know her better these past few weeks. Thanks also to each person who spread the word about the event, each person who contributed an article, and each one who visited the blogs and read the entries.  This celebration would not have happened without the participation of all of you!!